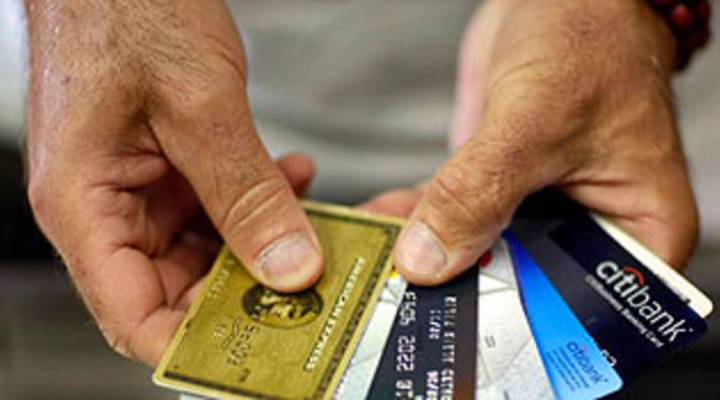 COPY
A man shows off some of his credit cards. Joe Raedle/Getty Images

A man shows off some of his credit cards. Joe Raedle/Getty Images
Listen Now

STACEY VANEK SMITH: Research from the Federal Reserve Bank of Chicago has found that the ever popular rewards credit cards like cards that give you cash back or airline miles cause people to spend more and go into more debt. The study found a 1 percent cash back reward was usually worth about $25 a month, but would increase their spending by nearly $70 and boost their credit card debt by $115 a month.

Ron Shevlin is a banking product analyst with the Aite Group. He joins us live. Good morning, Ron!

VANEK SMITH: So, the Federal Reserve Bank of Chicago found rewards cards can be hazardous to a consumer’s finances. But you’re a little skeptical of that.

SHEVLIN: I have a couple issues with the way the study was conducted. First of all I think we have to remember that it was conducted between 2000 and 2002 time period. Which was a period of increasing unemployment, an unemployment increase from about 4 percent in 2000 to 6 percent in 2002. And so in tough economic times people are going to spend more regardless of the type of card they have. The other issue that the study was conducted among a single card issuers base of card holders, and different card issuers target different times of consumers. And so it’s possible that the underlying cardholders that are reflected in this study are not really representative of card holders in general.y

VANEK SMITH: And it was also before the credit crunch.

SHEVLIN: And before the credit crunch and also before the liberation of a more different types of reward cards, so I think there’s some issues with the timing of the study.

VANEK SMITH: You’ve done your own research on rewards cards and reward cards users, what have you found?

SHEVLIN: Pretty much the opposite of what the stat has found. The consumer research that I’ve conducted over the past couple of years, we tend to find that consumers who are reward card holders, first of all tend to have higher income and higher hold of affluence and therefore are actually less likely to be, what we call revolvers, people who revolve their credit card balance and run up interest payments. And so they tend to be people who don’t care about the rates or the fees on the card because they’re not going to general interest payments. They’re going to pay that card off every month, and get rewards cards so that they can max out on their rewards.

VANEK SMITH: And, just really quickly — what kinds of rewards cards are we getting now that we are starting to get credit card offers again and are they a good deal?

SHEVLIN: With certainty, I think a greater proliferation of the types of reward cards, I think in generally if you look back over the past couple of years the trend has gone from travel focused-reward cards to cash back and now to things like more merchandise where you’re getting better deals and discounts on specific types of merchandise. This is very helpful especially for the card issues because they’re helping to drive more sales to the merchants and retailers who are helping to pick up some of the costs of the reward cards. And so what this means from the consumer perspective is that there’s better choice among cards, you don’t have to be limited to just travel. And second of all, if you’re a type of consumer who is going to use the credit card more as a payment card then as a credit card, the rewards cards can be a great deal for you.