Bob Moon: Wind and snow notwithstanding, many of us will trek back to stores to return gifts this week. We return up to 30 percent of all those Christmas reindeer sweaters, As-Seen-on-TV donut makers and the like.

As Marketplace’s Jennifer Collins reports retailers are finding ways to cut back on returns, starting when a gift is purchased.

Jennifer Collins: Amazon has patented technology that may get what you really want next holiday season. The company will allow you to set rules for the kind of gifts you’ll accept.

Howe: If you know Aunt Sally always gets you an ugly sweater…

You can tell Amazon to convert her gift into a gift certificate. And Amazon will even send her a thank you note for that sweater you never got. So, a retailer that’ll cover for you — that’s quite the service.

There are plenty of reasons for stores to cut back on returns. The National Retail Federation expects returns to total more than $43 billion this holiday season. Roger Kay of Enpoint Technologies says the problem’s particularly bad with electronics.

Roger Kay: When the goods come back, they could never sell that again as new product. So right away they take a hit.

Then there’s the added shipping cost and labor restock items. Retailers are also trying to cut costs with programs like SmartPost, which bundles individual packages into larger shipments. Other retailers scan for fraud by tracking customers who may return items too frequently.

Madison Riley: I think Amazon is setting the tone for retail in general. Certainly, they’re a guidepost for where retail will move in the future.

Howe: You do have to still face the problem of Aunt Sally wondering why you’re not wearing that sweater.

And maybe Aunt Sally won’t be so happy if she finds out Amazon didn’t send you what she paid for.

Moon: OK, so maybe that takes care of the jelly-of-the-month club, but how would it save poor Ralphie
from that pink bunny suit his aunt made him in “A Christmas Story”? 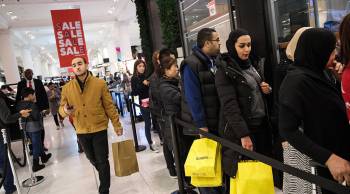 Ten percent of holiday gifts end up getting returned