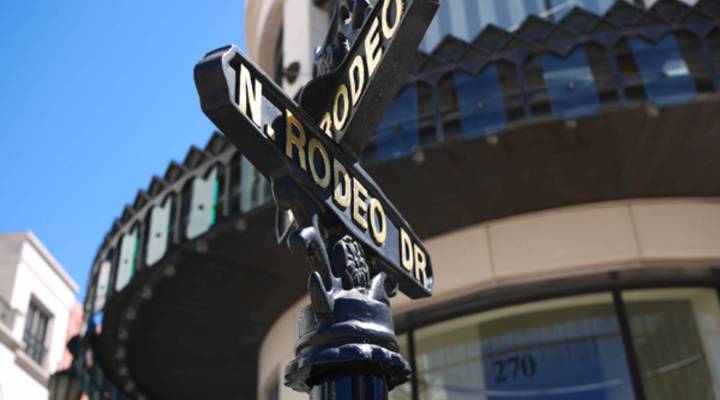 COPY
Rodeo Drive in Beverly Hills, Calif., is an icon of wealth in the U.S. Six miles away at the corner of Rodeo Road and Crenshaw, it's a different story. Stephen Hoffman/Marketplace

Rodeo Drive in Beverly Hills, Calif., is an icon of wealth in the U.S. Six miles away at the corner of Rodeo Road and Crenshaw, it's a different story. Stephen Hoffman/Marketplace
Listen Now

TESS VIGELAND: One common theme in the comments we’ve received from you about this subject is that the question of whether $250,000 makes you rich depends entirely on where you live. We decided to test that theory across a six-mile span of Los Angeles. You are no doubt familiar with Rodeo Drive in Beverly Hills.
You may not be as familiar with Rodeo Road in South L.A.

Michael Stoll is our tour guide for both. He teaches public policy at UCLA. We met up at the corner of Wilshire Boulevard and Rodeo Drive.

VIGELAND: So let me do a little description for folks who have not been here. We are standing at the corner, of not just Rodeo and Wilshire, but the corner of Tiffany and Vuitton and Jimmy Choo. So let’s talk a little about what $250,000 means in this kind of culture.

MICHAEL STOLL: $250,000 means in this part of town that you are still at the top 2 percent of the income distribution in the United States, and you are only slightly higher that the average family income in Beverly Hills.

The way we think about income is in two different ways, one is an absolute interpretation of income and the other is a relative, and if you are thinking about income relative which means you are comparing yourself to your neighbors or some other kind of reference point. If your neighbors are putting in $10,000 refrigerators and $15,000 washing machines and dryers, $250,000 would seem like that’s not a lot of money particularly if you are trying to meet a certain level of living. But on an absolute basis if we look at the median income of the United States which is about $55,000 to $59,000 a year, $250,000 is a lot of income.

VIGELAND: And isn’t it also a lot about the choices that you make. For example in Manhattan if you decide to get an apartment near Central Park, if you decide to send your children to private school, those are decisions that you are making, that’s not necessarily what you have to do live there.

STOLL: That’s correct, and what typically happens though is that the demand usually meets the supply, so if your income raises up to $250,000 or $300,000 more than likely your spending habits also rise to meet that income threshold too. So most families would always say that they are squeezed, but you have to ask the question again, what is it that is required to have a decent standard of living in the United States and if we were to have some absolute notion of what that is I think it would still be fair to say that even in Beverly Hills $250,000 would provide for a lot of comfortable living.

VIGELAND: Well let’s talk about how we do define those absolutes, what do you think people think about when they consider what qualifies you as wealthy, what do you have.

STOLL: One way to think about it is to think about how the Federal government defines what is an adequate standard of living. And the way that we do that is through the poverty line, and the Federal poverty line right now for a family of four is somewhere around $25,000 a year. So most people who think about absolute sources of income would say well somewhere around there, others would say, well what is the median income in the United States, again its about $55,000 to $59,000 a year. That’s certainly much lower than the $250,000 threshold.

VIGELAND: Well, I think we have had enough here on beautiful Rodeo Drive, shall we head to another part of town that may paint a whole different picture for $250,000.

VIGELAND: All right, well see you there.

VIGELAND: Well, Michael, we are now in our new location at the corner of…

VIGELAND: Tell us about this part of town.

STOLL: This part of town is considered South Los Angeles, if you look at the average income in the immediate neighborhoods around here, people earn an average about $45,000 to $50,000 a year, so it puts them really close to the national average for income in the United States.

VIGELAND: You have a bit of an attachment to this neighborhood.

STOLL: Yes, coincidentally I was raised right around the corner, so I have seen this area come and go through its ups and downs.

In the early 1980s and 1990s this area had a very high crime rate during that time, but has since seen a little bit of a renaissance because of its nice location in between the beach and downtown LA, so this area is on a slight uptick. But again if we were to think about that $250,000 line it’s very unlikely that anyone in this neighborhood would be earning that and most people who would think about that would know that their standard of living would raise about five times its current level. And if you were to say that we would add five times your income to your current income, most people would say that would be great I would be rich.

VIGELAND: Any final thoughts as we leave Rodeo Road and our previous visit to Rodeo Drive and again that magic number $250,000?

STOLL: And remember we just drove six miles, there is a noticeably physical difference in the neighborhoods, in the shopping quality, in the stores that are available to consumers in these areas, yet this area represents the average income distribution in the United States. So we are standing in the typical American neighborhood.

If we were to go 10 miles to the east and go into an area that has an average income of $18,000 to $20,000 it would be significantly different. And there the difference between what people would interpret as $250,000 and whether or not it is considered wealthy or not or just making ends meet. I think people would even have a hard time just listening to reporters or academics talk about the struggles of the people at the $250,000 level. I think that would be an even more laughable argument to make.

VIGELAND: Well Michael Stoll, professor and chair of public policy in the school of public affairs at UCLA, thanks so much for traveling around town with us.

STOLL: Thanks for having me, its been a blast.

Vigeland: View a slideshow of photos from Rodeo Drive and Rodeo road.