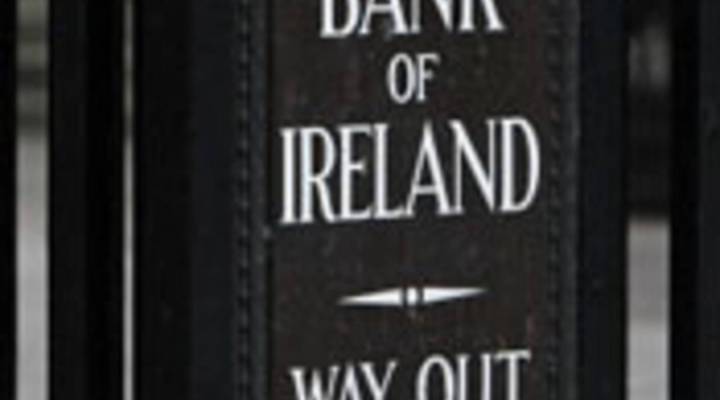 COPY
A man leaves the Bank of Ireland in Dublin. Ireland admitted Monday it is in contact with 'international colleagues' over its debt crisis but denied seeking a bailout. PETER MUHLY/AFP/Getty Images

A man leaves the Bank of Ireland in Dublin. Ireland admitted Monday it is in contact with 'international colleagues' over its debt crisis but denied seeking a bailout. PETER MUHLY/AFP/Getty Images
Listen Now

Stacey Vanek Smith: When a country’s debt — its treasury bonds — is downgraded, it basically runs into the same problems a person runs into when their credit score gets cut. It’s harder to get a loan and if you do get a loan, you’re stuck with a really high interest rate. But there’s an added risk for countries, says Harvard’s Kenneth Rogoff, former chief economist with the International Monetary Fund.

Kenneth Rogoff: It’s pushing your debt out of the portfolio of some of the biggest players because insurance companies, pension funds, follow very conservative strategies. They have rules, and if the debt is downgraded too far, they simply have to dump it.

Rogoff: Even if it’s absolutely the right thing to do, it’s very destabilizing. It’s very disruptive to the banking sector, to commerce. It’s a level of uncertainty that no one wants.

There’s an additional risk if Ireland defaults, says Eswar Prasad, an economist with the Brookings Institution, because investors could start casting a critical eye on other countries in the European Union.

Eswar Prasad: If this causes investors to take a hard look at Spanish, Portuguese and Italian bonds and start dumping those bonds, then we could have a real problem on our hands.

Prasad says if big economies like Italy and Spain start to have trouble borrowing, it could rattle all of Europe and pose a real threat to the Euro.