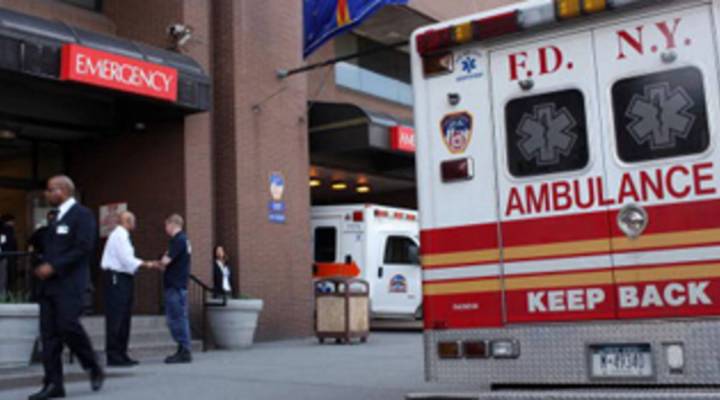 NYC private hospitals to get big bill for ambulances

COPY
An ambulance is parked in front of St. Vincent's Hospital on April 7, 2010 in New York City. Spencer Platt/Getty Images

NYC private hospitals to get big bill for ambulances

Tess Vigeland: State and local governments are trying just about anything these days to get their budgets out of hock. Arizona is cutting back on funding for medical transplants. Cities are inviting corporations to slap their names on everything from subway stops to playgrounds.

The latest sign of desperation? New York City wants private hospitals to pay up to $1 million a year to have their ambulances respond to 911 calls. New York’s bravest don’t have enough ambulances, so 25 city hospitals help pick up the slack. Needless to say, this move is opening some fresh wounds.

Stacey Vanek Smith: It’s a sound you hear a lot if you live in New York.

To many private hospitals, that now sounds like a bill for $1 million, or more.

Terry Lynam: We anticipate this would cost us about $1.5 million.

Terry Lynam is with Northshore LIJ health systems, which operates several New York hospitals and dozens of ambulances. Under the new plan, when a 911 call gets passed to one of its ambulances, Northshore would have to pay.

Lynam: Our hope is that there will be efforts made to reduce this burden.

Some hospitals are threatening to stop taking 911 calls. Dr. Lewis Marshall chairs emergency medicine at Brookdale Medical Center. He says the new fees would cost his Brooklyn hospital nearly $300,000 a year. Marshall says if hospitals like his opt out, residents will suffer.

Lewis Marshall: It would reduce the availability of ambulances. I think that the waiting times for ambulances would go up.

The city says that private hospitals benefits by being part of the 911 network and should share in the cost. More and more cities are charging fees for emergency services, as they scramble to plug holes in their budgets. Chris Hoene is the director of research at the National League of Cities.

Hoene: The emergency services budgets tend to be a part of larger public safety budgets and those are often times the single largest category of expenditures in city governments.

Hoene says many cities have started charging residents for 911 calls — at times, hundreds of dollars for a ride to the hospital.