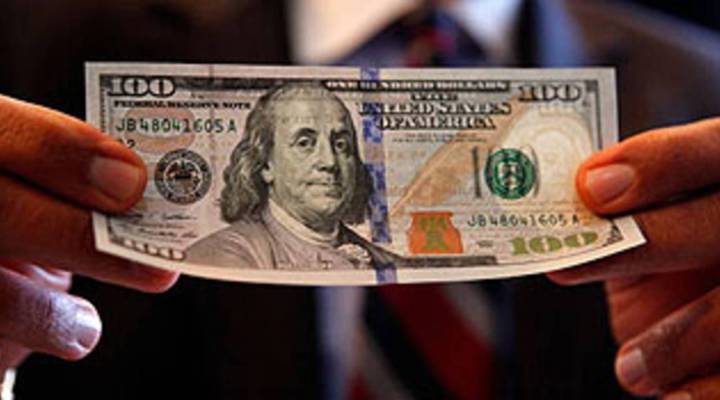 COPY
U.S. Bureau of Engraving and Printing Director Larry Felix explains some of the security features of the new $100 note after it was unveiled at the Treasury Department April 21, 2010 in Washington, DC. According to the Treasury Department, the U.S. government evaluates advances in digital and printing technology to redesign currency and stay ahead of counterfeiters. The new note will be put into circulation in Feburary 2011. Photo by Chip Somodevilla/Getty Images

U.S. Bureau of Engraving and Printing Director Larry Felix explains some of the security features of the new $100 note after it was unveiled at the Treasury Department April 21, 2010 in Washington, DC. According to the Treasury Department, the U.S. government evaluates advances in digital and printing technology to redesign currency and stay ahead of counterfeiters. The new note will be put into circulation in Feburary 2011. Photo by Chip Somodevilla/Getty Images
Listen Now

Bob Moon: It’s one thing to have the toner run out and have to run a whole batch of copies all over again. But when the government makes a printing error, it adds up to real money.

The Treasury was all set to roll out a new high-tech, $100 bill two months from now. But the plans are on hold because of an unforeseen wrinkle. Literally. Apparently, all of the added holograms and ribbons caused the paper to fold, leaving blank spots. Not only will it take time to sort through 1.1 billion bills, it could cost a mint.

Stacey Vanek Smith: The new $100 bill was unveiled earlier this year to great fanfare, including a new video showcasing new high-security features, like a security strip woven into the bill and multi-colored holograms.

Dennis Forgue: They have a lot of very good devices in there. A little gaudy, but it is effective, yes.

That’s currency expert Dennis Forgue. He says creases are always a problem when currency is being printed, but not on this scale. The government has printed $110 billion worth of the new money and it’s estimated up to a third of it is flawed.

Forgue: It has to be some of the bells and whistles that caused it getting caught in the presses or something.

A government official told Marketplace it’s unclear what’s causing the problem. At 12 cents a piece, the bills have already cost the government more than $120 million. And it’s a bad time for the problem, says University of Florida criminology expert Richard Hollanger.

Richard Hollanger: Retailers are really struggling with this influx of counterfeit bills.

Forgaries spike when the economy’s bad and the C note is the most counterfeited U.S. bill. Hollanger says the dollar doesn’t have transparent windows and other features that make foreign currencies harder to fake.

Hollanger: People are bleaching out $1 bills and then over-printing $100 bills on top of them just using regular ink jet printers. I’ve got one in my wallet that’s really quite good.

Separating out the bad bills by hand could take decades. The government says it’s working on a speedier solution.