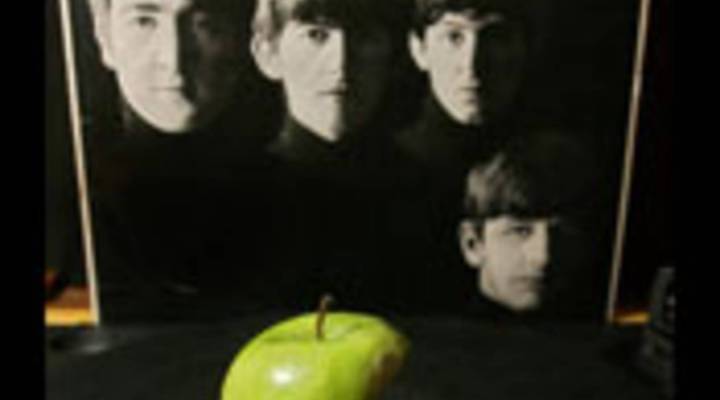 Could iTunes and The Beatles "Come Together?"

COPY
An apple is placed on a turntable against a background image of the Beatles in London, 05 April 2006. Apple computer defended its right Wednesday to use the apple logo when promoting its own iTunes music service. CARL DE SOUZA/AFP/Getty Images

Could iTunes and The Beatles "Come Together?"

An apple is placed on a turntable against a background image of the Beatles in London, 05 April 2006. Apple computer defended its right Wednesday to use the apple logo when promoting its own iTunes music service. CARL DE SOUZA/AFP/Getty Images
Listen Now

JEREMY HOBSON: Apple has scheduled an announcement for this morning that the company says “you’ll never forget.” It’s being reported that Beatles music will finally be available for sale at Apple’s online music store, iTunes.

Marketplace’s Stacey Vanek Smith reports on why it’s taken so long for these two to — come together.

: Up until now, if you tried to buy “Hey Jude” or “Lucy in the Sky with Diamonds” on iTunes you had to buy versions from a Beatles cover band. But it looks like all roads — even Abbey road — eventually lead to iTunes. The world’s largest music retailer is expected to announce a deal with Beatles’ record label EMI to sell Beatles music on iTunes. Part of the reason EMI hasn’t offered Beatles music online is that it didn’t have to. CD sales are far more profitable for record labels than digital music sales. Last year, the Beatles had the third best-selling album in the US. Billboard’s Mark Sutherland says this deal isn’t entirely about money.

The band and the brand have also had a long, litigious history. The Beatles sued Apple back in 1978 over the computer-maker’s logo and name.