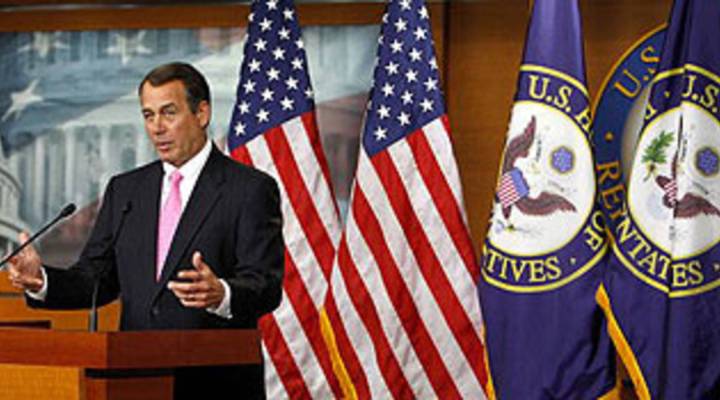 What a divided Congress means for the Fed

What a divided Congress means for the Fed

Bob Moon: A divided Congress raises lots of interesting questions. Perhaps foremost among them: what it will mean for the economy.

In the last few years, Congress has played a central role enacting laws designed to stimulate the economy. Now, potential gridlock puts more pressure to act on the Federal Reserve. And it did act, today.

The Fed announced it is going to buy $600 billion worth of government bonds in something the wonks call Quantitative Easing.

From New York, Stacey Vanek Smith takes a look at what it might do and what a GOP-controlled House might mean for the nation’s central bank.

Karen Petrou: Quantitative easing is when the government buys a lot of something: Treasury bills, Fannie or Freddie bonds.

The Federal Reserve buys those bonds from banks; to pay for them, the Fed essentially prints money. Then it hopes for a trickle-down effect: interest rates stay low, banks lend, people and business borrow and spend. It’s an indirect stimulus to the economy and it might not work. The Federal Reserve tried quantitative easing two years ago to the tune of roughly $2 trillion, and the banks didn’t exactly start handing out loans.

Chuck Gabriel: It paints a picture of, frankly, a last resort.

That’s political and financial analyst Chuck Gabriel. He says Federal Reserve Chairman Ben Bernanke has already pushed the limits of what the Fed can do.

Gabriel: You’ve got to give Bernanke and company huge marks for innovation. He created so many credit facilities during the dark days of ’08 and ’09. He was just a maestro.

But he may be running out of instruments. At the very moment that the Fed takes center stage in reviving the economy, its power could come under scrutiny from the new Congress says analyst Karen Petrou.

Petrou: I think we’re going to see one of the greatest challenges to the Federal Reserve structure.