What businesses want in a government

What businesses want in a government

Kai Ryssdal: It’s basically all over but the counting for the 2010 mid-term election cycle. And when the counts do finally start to come in tomorrow night, corporate America could be looking at a very different picture than it’s had the past couple of years.

We asked our Washington bureau chief John Dimsdale what the economic future might hold if the polls hold true.

John Dimsdale: Historically, businesses feel more comfortable when government power is split between the parties. That keeps ambitious agendas in check, reducing the cost of complying with new regulations.

Bill Schneider is an expert on polling at the Democratic think tank Third Way.

Bill Schneider: What businesses want is a government that’s not too extreme. That means usually that they prefer a divided government.

Like the Republican wave in 1994 that ended two years of Democratic control of Washington. The inter-party fireworks even shut down the government for a while. But for all the similarities with 1994, this year will be different, says Andy Laperriere with the ISI Group.

This time around, Laperriere says, gridlock will create a lot of uncertainty for business people who want to create jobs and reduce the deficit.

Laperriere: A lot of business people would like to see both of those things. If you get gridlock, you may get neither.

The worst of all worlds, he says, for companies that want decisions on tax cuts, health care, and financial regulations. Larry Burton at the Business Roundtable says businesses can’t afford an inactive government now.

Larry Burton: What is best for businesses when elected representatives bring an energy and commitment to Washington to tackle the big issues impacting the economy and jobs?

Which means divided government is less likely to shield businesses from political uncertainty this time around. 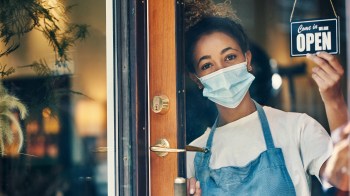