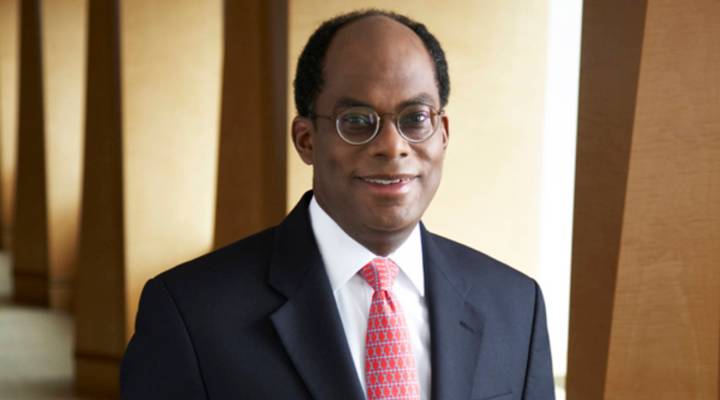 TIAA-CREF CEO on the future of retirement

TIAA-CREF CEO on the future of retirement

Tess Vigeland: For those of you who are most definitely not in the nevertirement camp, the question is whether you’ll ever have enough money to stop working. Just about every survey done on retirement planning shows we as a nation simply do not save enough.

Roger Ferguson knows that as well as anybody. He’s the CEO of TIAA-CREF, the largest private retirement system in the country with nearly $400 billion in assets.

I and my colleague Kai Ryssdal recently sat down with Ferguson at TIAA-CREF headquarters in midtown Manhattan to talk about the future of retirement in the wake of the Great Recession.

Roger Ferguson, welcome to the program.

Roger Ferguson: Thanks. Nice to be here.

Vigeland: We’re here on the roof of your building on a beautiful, sunny day. Tell us a little bit about what we are looking at here.

Ferguson: Okay. We’re looking at a number of famous the buildings. Right over your shoulder, Tess, is a building is now called the Met Life building. It used to be the Pan Am building. We can also see from here J.P. Morgan Chase, their Midtown office. And then we have up that way, that’s Citibank building right there.

Vigeland: And I believe way over my right shoulder we have the Empire State building.

Ferguson: And there is exactly right, the antennae from the Empire State building right down there.

Kai Ryssdal: You made a speech at the National Press Club a number of months ago in which you said, “We are at a pivotal moment in retirement security in this country.” How do we make that pivot? We know the problems the recession and the financial crisis have brought. Now what do we do?

Ferguson: I think in order to make that pivot, Kai, we need to really have a plan. We need to adopt what I describe as the retirement system for the 21st century and be quite clear about what we are doing. First obviously we have to have more people in positions where they can save which is to say get people started savings earlier, get them into retirement systems automatically. Secondly, we do have to tell them how much they need to save. And retirement economists tell us that at this stage if you need to replace 70 to 80 percent of your pre-retirement income, you probably need to be saving somewhere around 10 to 14 percent. The third element is an appropriate range of investment options. Fifteen to 20 is what most professionals tell us is called for.

Ryssdal: Is there something about people in this country that, you know, I mean we all have expenses and many people have lost their jobs and this has been an incredibly difficult time, but we have been non-savers in this country for a long time.

Ferguson: You make a very good point. We are in the midst of a very slow recovery from a very deep recession, there’s no question. But even in the best of times, I think people did not save enough.

Vigeland: For the people who really did save though, one of the common themes running through your plan is that we are all very much responsible for figuring out our own numbers. The demise of the pension has really meant that it’s really up to us to figure out what to do with the money that we do set aside for retirement. I wonder if we could get your thoughts on whether we are able to handle that responsibly?

Ferguson: Well Tess, you put your finger on a very important point. One of the other things that is an important part of the system is to get good advice, objective advice from a trusted expert, because handling one’s retirement is, as you point out, relatively complex. We also though have to make sure that people are well educated. So it’s a combination of learning a bit more, increasing the level of financial literacy in the country while also providing as much objective, non-commissioned advice as we can possibly find.

Kai Ryssdal: So who handles your retirement?

Ferguson: All of my retirement money is managed by my company at TIAA-CREF. I’ve got four very good advisors actually. I’m not sure one needs that.

Ryssdal: There are so many demands on our savings time though, there are so many things that you have to save for. Somebody told me once that what you ought to do is think about it like you have to think about at an airport when you are traveling with a kid and the stewardess comes by and says, “When the oxygen masks drop down, take care of yourself first and then take care of your kid.” So basically you’ve got college accounts, and you’ve got retirement, and you’ve got all sorts of other things. Prioritize for me how people ought to start thinking about that stuff.

Ferguson: First recognize that they are not necessarily in conflict. There are, as you say priorities. I think one has to put a little something aside for retirement even as you are paying for your mortgage, paying for your children’s education. And you recognize that as those other demands on your savings go away, you should increase what you’re saving for retirement.

Vigeland: I wonder if you would be willing to answer a couple of questions from our listeners that we solicited. We told them that we were going to be talking to you. Nathan Bishop of Albuquerque, N.M., wrote in and said, “It seems to me that many people get stars in their eyes about double digit returns and early retirement. I’m out of here at 58 or 59. How does your company talk people out of taking inappropriate risks and maybe guide them to a more achievable goal?”

Ferguson: The first thing that we do is we have a very serious conversation with them about their own risk appetite and we try to broaden that conversation so that they understand both the ups and the downs. Secondly, we look at their entire portfolio, so that we understand the assets that they have with us and the assets that they may have other places. And then we do something very important which is we do a modeling of the likely retirement outcome with various different scenarios. So they can then understand the stars in their eyes may not come to reality. And out of that I think they get brought back to earth, if you will.

Vigeland: And from our Facebook page, Tom Cote wrote in and wanted to know, “How do you know how much you will need to retire?” He is worried about not only under-saving but over-saving. And you can go with every calculator in the book and still not know how long you are going to live for example. You know, which is a question, they ask you that question in the calculators.

Ferguson: A couple things: one is most people should assume that they are probably going to live about 20 or 30 years in retirement which is not very concrete because it varies from person to person. You are absolutely right. At the end of the day, the calculator can give you a range of answers. That’s why we also say to people, “Well you should think about replacing 70 to 80 percent of your pre-retirement income.” Because that really targets people in on a number. And then the other thing that we’ve seen, is sadly very few people seem to be over-saving for retirement. The McKinsey study that I most recently saw showed that the average American maybe is short of retirement savings by something like $250,000. And so while there may be a small handful who are over-saving, it looks as though the vast majority probably aren’t saving enough.

Vigeland: Roger Ferguson, president and CEO of TIAA-CREF. Thanks for joining us up on the roof.

Ferguson: Thank you very much. It’s been a pleasure.

Vigeland: To hear our entire conversation with Roger Ferguson — including the version that aired on our sister show Marketplace, visit our website.