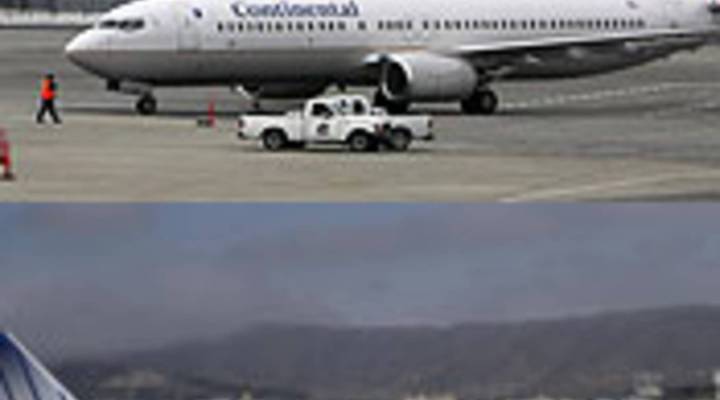 United and Continental, a marriage of equals

United and Continental, a marriage of equals

Kai Ryssdal: Think about this the next time you’re stuck in a middle seat on an L.A. to New York red eye, waiting desperately for a bag of peanuts and a Coke to come your way. Your already slim options for which airline you want to fly are about to get smaller.

United and Continental have been working on a merger for months now. Shareholders finally approved the deal today. It will create the world’s largest airline once all the kinks are ironed out, but Marketplace’s Stacey Vanek Smith reports that could take a while.

Stacey Vanek Smith: You could call it a $3 billion marriage of equals. United and Continental are roughly the same size. Continental will be taking United’s name, and United will sport Continental’s blue and gold logo. The airlines say the union will them save hundreds of millions of dollars a year.

Mike Boyd: One is strong in Asia, that’s United. The other’s strong in Latin America, that’s Continental. There’s not a lot of overlap and it fits pretty well together.

Economist and former United pilot Vaughn Cordle agrees. He says the airline industry is finally returning to profitability. Joining forces will help United and Continental hold down prices and compete with discount airlines and the newly merged Delta and Northwest. Still, Cordle sees some troubles ahead.

Vaughn Cordle: There are some cultural differences, and there are some major risks. The number one risk is the labor risk.

Cordle says United has had a difficult history with its unions and Continental pilots get paid a lot more — all of which could create tough labor negotiations.

Economist James Brock, with Miami University, also has concerns. He says it’s one thing when a big company swallows a smaller one, but joining two giants can get messy.

James Brock: It’s not as easy as just change the name and paint something new on the side of the plane. They are complicated organizations, they have complicated seniority structures, computer reservation systems.

It’s expected to take years before the airlines fully merge — the combined carriers will serve 144 million passengers a year — and have more than a fifth of the U.S. market.