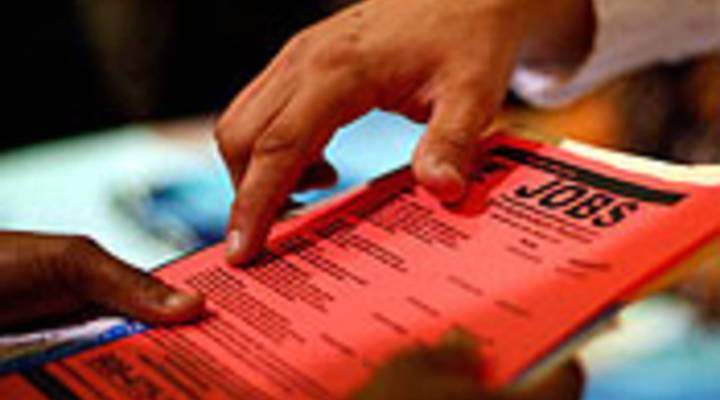 Kai Ryssdal: Economic indicators come out pretty much every day. Some of them we pay a lot of attention to. Others, we just don’t. One of the — ones of the ones we usually don’t talk about too much — is a stat called weekly jobless claims. They jump around a lot — it’s a weekly number, after all. Kind of like weighing yourself every morning on the bathroom scale. You lose any sense of context.

But weekly claims caught our eye this morning. Because nearly 480,000 people made first time claims for unemployment benefits last week. That’s the highest that number has been since April — not the way anybody wants the labor market to be going.

Stacey Vanek-Smith: Weekly unemployment numbers are notoriously volatile, but lately they’ve been eerily consistent, says Ken Goldstein, an economist with the Conference Board.

GOLDSTEIN: That’s a bad sign that people have gotten their last check that they’re eligible for, and there’s still no job for them.

Goldstein says in a weak job market, people stop spending, and that creates a vicious cycle.

GOLDSTEIN: Business looks at that and says, “Where’s the need to add more staff?” Consumers see the lack of hiring, so consumption remains very weak.

TOM HIGGINS: That is the vicious cycle, what we’re hoping to see is a reversal of that: the fortuitous cycle.

That’s Tom Higgins, chief economist with Payden Rygel. He points out that slowly, but surely, the private sector has been adding jobs.

HIGGINS: Private companies start hiring workers, then you see the wage growth and then finally you see demand increase, which leads them to hire more people.

But economist Ken Goldstein says job growth will have to basically double before the unemployment rate starts to go down.

GOLDSTEIN: It’s starting to feel like that play, “Waiting for Godot.” This is a different economy. The kind of economy we had, even in 2006, it’s gone. It no longer exists.

Goldstein predicts it will take years for the unemployment rate to drop back down to pre-recession lows.