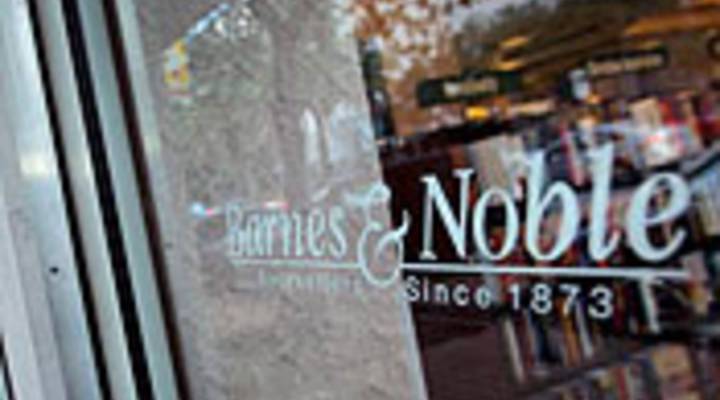 Bob Moon: You can almost keep track of who’s having, shall we say, “technological difficulties” by watching share prices. Under intense pressure from Netflix and RedBox, shares of Blockbuster video are down to 18 cents. Under intense pressure from Amazon and Wal-Mart, stock in Barnes & Noble had steadily plunged this year by almost 40 percent. Until today. Its shares are flying high now, since the news it’s posted a “For Sale” sign. It’s the latest plot twist for a publishing industry that’s madly trying to figure out its next chapter.

Stacey Vanek-Smith: A decade ago, Barnes & Noble was worth about $2 billion. Today, it’s worth less than half that. Sales and profits have been steadily sliding.

Michael Norris: This whole announcement caught everyone by surprise.

Norris says Barnes & Noble has made a lot of progress — it expanded into the textbook business, opened an e-book store and released the Nook, it’s own e-book reader.

Norris: One can’t help but be pleased with how far the company has come in just the last 12 months, so I would have to think that there is some behind-the-scenes shareholder drama that’s unfolding.

In fact, Barnes & Noble founder and largest shareholder, Leonard Riggio, is said to be contemplating a bid.

In-fighting aside, the company faces concrete challenges. Scott Lubeck is executive director of the Book Industry Study Group. He says Barnes & Noble has to figure out how to get people in the door.

Scott Lubeck: Learn to become much more consumer focused and looking at new ways to drive value to consumers who come into bookstores.

Industry analyst Michael Norris says big-box bookstores are getting hit by discounters like Target and Wal-Mart, which stock best-sellers, and are finding themselves in a retail no-man’s land.

Norris: They’ll never have the same amount of selection that the Internet has, and they don’t always have the kind of personal service that an independent bookstore can offer.

Norris says Barnes & Noble’s strong brand and assets could be appealing to potential buyers, but rival Border put itself up for sale two years ago and was never able to find a buyer.