Progress in Haiti slow due to lack of funds

Progress in Haiti slow due to lack of funds

Kai Ryssdal: Monday was six months since the earthquake in Haiti. And despite the billions of dollars in aid that were promised, a report from the Senate Foreign Relations committee not to long ago sums up reconstruction in just one word: Stalled. Companies that hoped to get some of the major contracts that reconstruction would have brought have their own word: Waiting.

Kenny Malone: By one estimate, there’s enough rubble in the streets of Haiti to fill five Superdomes. A sort of fitting statistic for developer J.R. Bergeron, who calls the earthquake…

But with this highway project in South Florida, Bergeron is stuck playing in the Pee-Wee leagues. He really wants to be in Port-au-Prince — to be on contract building new roads, paving new runways and recycling debris. But a shortage of cash in Haiti means Bergeron is just waiting.

Bergeron: And not just am I waiting, the Haitian people are waiting. I mean, I can wait forever. You know, obviously we’re standing here right next to 595 right now, I-595, which I have a $100 million contract here. I’m not starving, they are.

Things seemed so promising. In March, 150 nations pledged more than $5 billion to rebuild Haiti. Contractors lined up. Bergeron quickly partnered with a cement importer from Haiti to make his pitch. Another developer went ahead and just shipped his debris-removal equipment to Haiti, hoping for the best. Others actually started working, assuming a contract would follow. But very little has happened.

Bergeron: I don’t think any money’s really coming out to Haiti for another six months. It’s a shame to say that, and it’s a shame to see the people and the devastation that they’re in.

Only 10 percent of the pledged money has actually come to the Haitian government. Prime Minister Jean Max Bellerive says that without money, there can be no major contracts. And there have been unforeseen problems, like losing some of Haiti’s top minds during the earthquake, which began just before 5 p.m.

Jean Max Bellerive: Because who is working in the administration after five is the people working harder. Those are the ones that were crushed under the ministries.

Bellerive said the government has been able to issue a few contracts to build two important bridges in northern Haiti. In northern Miami, the Innovida company has been working on some important shelters for Haiti. The company sells prefabricated houses that are fireproof, waterproof and earthquake resistant. Outside a factory warehouse sits a simple, rectangular hut the size of a shipping container.

Andres Duany: It’s all just one material, Innovida plus glue. That’s all.

It was designed by one of Miami’s most famous architects, Andres Duany. Innovida enlisted Duany to study Haitian culture, talk to anthropologists, and design the perfect shelter. What he didn’t see coming were problems with land rights.

Duany: So you might build a house on a lot that maybe looks empty or has been empty to give to somebody. And then somebody might show up and say, “Sorry that’s my lot.” So, you know, it’s very hard establish ownership, and that’s holding things up tremendously.

Innovida decided not to wait for one giant government contract. They’ve been a rare success story, piecing together enough work from private Haitian companies.

Back at his highway project, Bergeron is turning his impatience into something productive, a special project. He says until he can train Haitian workers in Haiti, he’ll do it right here, on I-595.

Bergeron: When they learn how to run the equipment, once they get off the shovels and startin’ just like I started — do you know what I mean? — right from the ground up, you learn your way how to do it and then you can take that experience on for life and do it anywhere.

Bergeron helped Henry Joseph and James Delve get temporary protected status, which will allow them to live and work in the U.S. for at least another year. Joseph looks on as the excavator scoops up chunks of concrete.

Malone: What kind of machine is it?

Henry Joseph: I don’t really, know because I’m very new to the job.

Joseph: Yeah, I know I will.

Malone: You’ll be driving one soon.

At the current pace of reconstruction, Bergeron suspects Joseph will have plenty of time to learn that excavator. He says it could be a while before Joseph or anyone is hauling debris in Haiti on a large scale. 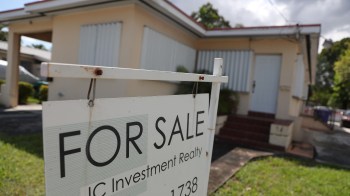