More From This Show
0:00 / 0:00
With midterm elections approaching, help us make everyone smarter about the economy. Donate Now
BP Spill: Ripples

Kai Ryssdal: The White House has gone back to the well, if you will, in its efforts to stop deepwater offshore driling. Interior Secretary Ken Salazar released a revamped moratorium this afternoon, one the administration hopes will meet the requirements of the federal judge down in New Orleans who threw out the first attempt. And as the oil spreads to beaches in Florida, everybody’s got worries about tourism.

Jay Field reports from Pensacola investors and developers are bracing for what they fear could be a a commercial real estate bust.

Jay Field: I’m standing on Pensacola Beach with my back to the Gulf of Mexico. You can see the remnants of the tar balls that have been washing ashore here for few weeks now. In front of me, is the next big, multimillion dollar resort due to open up here. You can see the outlines of its 206 rooms and balconies, but it’s still more concrete and cement skeleton, than actual hotel.

Julian MacQueen: It’s the most out of control I’ve ever felt since I started my company 25 years ago.

Julian MacQueen, who develops and runs hotels, is building this one. It’s a Holiday Inn.

MacQueen: That sense of helplessness would cause me not to build anything new if I was in a position to make that decision. However…

He isn’t now. Construction on the beach hotel and another one MacQueen is building in Alabama, is too far along to stop. He’s already sunk $78 million into them. But the oil spill affected his business long before any oil washed up here.

MacQueen: We watched the pace of reservations start to denigrate beginning the first week in May really, it started to be affected. And it continued to go down and down and down.

By the end of June, a time that’s normally the busiest of the year, MacQueen’s seven other Gulf Coast hotels were generating half their normal revenues.

MacQueen: That’s not sustainable. We will have to do massive layoffs, and, if you take that to the extreme, we’ll have to stop paying our mortgages and we’ll have to start looking at some plan of wrapping up our business.

A few weeks ago, MacQueen filed his first claim with BP to cover millions in lost revenue. He says he thinks the oil company will help him.

But who’s going to help regional banks that lend the money for projects like his? That’s exactly what Buzz Ritchie is worried about. He runs Gulf Coast Community Bank. He started studying his $200 million loan portfolio the minute the oil began flowing.

Regional banks have a lot on the line, says economist Rick Harper. He’s at the University of West Florida. He estimates panhandle banks have lent out about $4 billion in real estate loans. They were just starting to recover from hurricanes and the burst housing bubble.

Rick Harper: And then to have the oil spill decrease demand is very problematic.

Harper says any more damage to banks means a much longer recovery here in the Gulf. Banker Buzz Richie says just getting the oil leak capped would be a relief.

Ritchie: What’s this going to amount to? How bad is it going to be? And how long is it going to hang around? And nobody can answer those questions. So, business doesn’t like uncertainty. Our budgets are questionable. Our forecasts, our game plans, our strategies.

And he says, that’s a tough place to be. 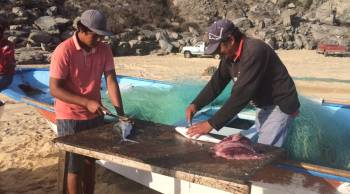 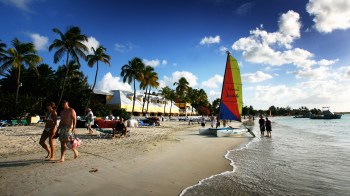