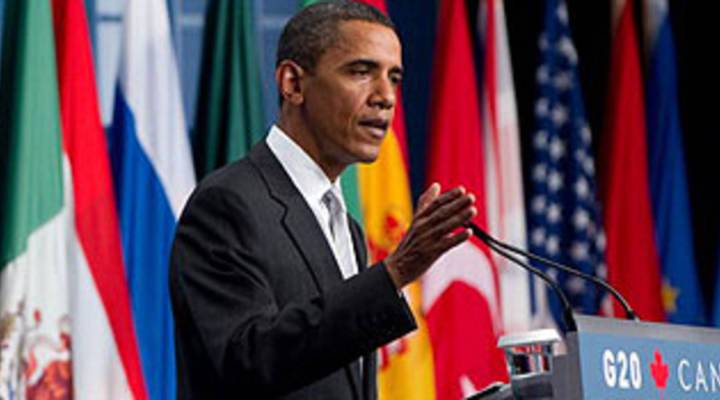 Obama’s council of CEOs would work to double exports

COPY
U.S. President Barack Obama speaks during a press conference at the conclusion of the G-20 Summit in Toronto, Canada. Saul Loeb/AFP/Getty Images

Obama’s council of CEOs would work to double exports

Stacey Vanek-Smith: President Obama says he wants to double exports. To do that, he’s appointing 18 company heads to serve on a U.S. export council. The president will give an update later today on the council plans and announce more big-name members. For our own update, we turn to Nancy Marshall Genzer. She joins us live from our bureau in Washington, D.C. Good morning, Nancy.

Vanek-Smith: Nancy, why is the president focusing on exports? Why not jobs?

Marshall Genzer: Well, President Obama says exports actually do create jobs here in the U.S. Consumers had been the engine driving the growth in our economy, but they’re tapped out, and consumer confidence fell recently. I talked about this with Man Mohan Sodhi, he’s an expert in manufacturing and distribution at Cass Business School in London, and he says consumers just couldn’t go on spending forever.

Man Mohan Sodh: The U.S. consumser has spent a lot. I mean internal growth is hard to imagine — certainly not the kind of growth that President Obama is targeting.

And as you mentioned, Stacey, President Obama wants to double U.S. exports within the next five years.

Vanek-Smith: So Nancy, why do we need an export council?

Marshall Genzer: President Obama is reaching out to the private sector in an effort to achieve this goal. He wants to pick the brains of the nation’s top executives. And this council is led by the heads of Boeing and Xerox, and the CEOs of Disney and Ford are apparently among the council members that will be announced today.