Can Robin Hood save Nottingham?

Can Robin Hood save Nottingham?

Bill Radke: We’re celebrating the summer vacation. So far we’ve talked about how you might get to your destination — at the mercy of the airlines. Now let’s talk about the where. Tourism bureaus spend so much money just trying to put their city or country on your mental map, they can only dream of the free advertising that’s fallen in the lap of Nottingham, England.

This summer’s movie “Robin Hood,” with Russell Crowe, has grossed more than $100 million. It’s still playing in hundreds of American theaters, and Nottingham hopes that has you dreaming of a trip to Sherwood Forest.

We get more from Marketplace’s European bureau chief Stephen Beard.

Stephen Beard: The clock bell above the baroque city hall booms out across Nottingham. It’s called “Little John,” an hourly reminder of the city’s links with Robin Hood. Now, says tourism chief Mike Baulcombe, Nottingham has a really powerful medium to get that message across.

Michael Baulcombe: We’ve got a multimillion-dollar Hollywood blockbuster to get people to come and visit us, and bring their tourism dollars and also, of course, future investment.

The city has tried to cash in on the free publicity. There are organized walks through Sherwood Forest, archery classes and many displays of medieval combat.

But the clamor cannot conceal an embarrassing fact — the city itself has hardly any landmarks linked with the legendary outlaw. Very exasperating for tour guide Margaret Harrisson.

Margaret Harrisson: It is a problem. We are selling Nottingham. We have nothing to show that represents anything to do with Robin Hood.

Cave Tour: The dark underground caves you are about to enter were not created by nature.

Nottingham does have some great tourist attractions. These caves are well worth a visit. But they’re not connected with Robin Hood. Neither is Nottingham Castle. In fact, it’s not a castle, but a mansion built long after Robin’s day. There was a rather tacky Robin Hood theme park in the city; it went bust earlier this year.

Margaret Harrisson says the city has never known how to celebrate its most famous son.

Harrisson: Any other city in the world would give blood to have a hero like Robin Hood. And the one city that goes, “Oh, him again,” is us.

But some of the citizens are trying. This is Adrian Andrews in medieval costume, equipped with hunting horn, a bow, a quiver full of arrows and a sword. He hires himself out for public and private functions as the city’s “official” Robin Hood.

Adrian Andrews: I was always aware that there’s a gap in the market and things that the city council should have been doing. And so the ethos of Robin Hood lives on within me and my work.

But here in city hall, the council is trying to mend its ways.

Leon Unczur: We realized that Robin was way underutilized so it was: Let’s bring Robin back and do something really big for this city.

Leon Unczur was sheriff of Nottingham for the past year. Ironically — holding the office of Robin’s ancient foe — Leon has been casting around for ways to honor and exploit the legendary outlaw. He wants to set up a major Robin-related tourist attraction in the city.

Unczur: Robin Hood is a fantastic story to sell. It has the adventure, the romance, good over evil. We need something really ambitious for this city, and within six years, we should deliver it.

But tour guide Margaret Harrisson says she’s heard it all before — in fact, 20 years ago, after the last major Robin Hood movie. But it came to nothing.

Harrisson: I think you’ve got to think positive! And yes, of course, we will have a great, big major attraction. What year are we on? Let’s look at 3047 and we’ll get it!

She consoles herself: Her hero’s main activity is still flourishing here, though not as a tourist attraction. It’s robbing the rich to pay the poor. Today, Nottingham is home to the national headquarters of Britain’s Income Tax Office.

In Nottingham, this is Stephen Beard for Marketplace. 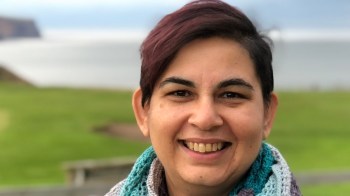