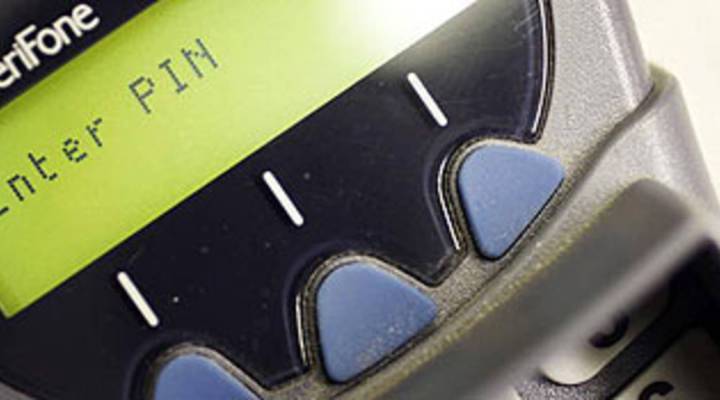 Kai Ryssdal: I direct your attention now to Federal Reserve Rule E. Not that there’s any reason you should know this, but that’s the rule that covers electronic fund transfers. A new interpretation of that rule goes into effect today. Which means that starting right now for new account holders — and next month for the rest of us — if we try to buy something with our debit cards and we don’t have enough in the bank to cover it, the card is going to be rejected outright. No more $35 overdraft protection, unless you say you really want it.

Stacey Vanek-Smith: Getting customers to risk a $35 penalty, just so their card doesn’t get rejected, might seem like a hard sell. Some banks aren’t even bothering. Bank of America is scrapping its overdraft protection altogether. Other banks are trying to scare customers into signing up, with ads like these…

Bank ad: There are few things more embarrassing than standing in line with your purchases all bagged up and being told your card has been declined. Besides the embarrassment…

The ads seem to be working. Estimates say nearly a third of bank customers have opted in to overdraft protection. Leslie Parrish is with the Center for Responsible Lending.

Leslie Parrish: What really matters is who is opting in. Is it that very profitable group of customers that overdraw their account frequently? Unfortunately, those are the most financially vulnerable customers.

Parrish says it’s too early to tell, but in the past, roughly 10 percent of customers generated nearly all of the $20 billion worth of overdraft fees banks took in every year.

Bank consultant Mike Moebs says the banks that are doing the best at signing people up, are stressing overdraft protection as a safeguard.

Mike Moebs: Those who are viewing this regulation as a positive for the consumer are getting an incredibly high consent.

Greg Graham, a lawyer in Commerce City, Colo., hasn’t overdrawn his account in years, but he opted in to protect his credit score.

Greg Graham: The last thing we would want to have happen is to have a bill be unpaid simply because we don’t have any overdraft protection.

Consultant Mike Moebs says many banks are trying to make overdraft seem less predatory, by lowering overdraft fees and offering to alert customers when their balances get low. That was part of why New Yorker Jennifer Vizina, who recently lost her job, opted in to overdraft protection for her Chase account.

Vizina signed up for a text message alert, that lets her know when her account dips below $150. She’s overdrawn before and probably will again. But what’s important to her is that her card works when she needs it to.