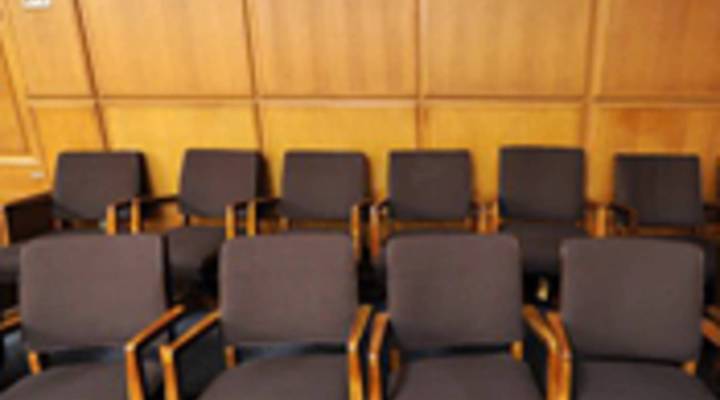 Steve Chiotakis: It’s not a piece of mail that’s welcomed everywhere. The jury summons. It’s a civic obligation, yes. But in this recession, jury duty can also be a financial burden. And that’s making it harder to find jurors. Marketplace’s Nancy Farghalli reports.

Nancy Farghalli: Richard Gabriel is the president of a national trial consulting firm in Los Angeles, so he’s asked the same question every single day:

Richard Gabriel: How do I get out of jury service?

Sorry, he doesn’t have an answer. But he says courts are having a tougher time with folks trying to get out of jury service. Blame the economic downturn. Jury service can affect those who are unemployed especially. It can mean less time to look for work. Last year in Los Angeles County, more than 25 percent of the jury pool were excused because of financial hardship. Gabriel says the recession has stressed court systems all over the country.

Gabriel: Judges have gotten more tougher on some jurors because they have heard so many excuses over the years.

But the real pressure is that states are hard pressed themselves. So they can’t raise jury payments. California only pays $15 a day. Colorado has one of the highest fees — at $50 a day.

Gail Ruderman Feuer is the site judge for the Metropolitan Courthouse in Los Angeles. She wishes states paid more. But, she says, judges have a strict policy on who can be dismissed for economic reasons.

Gail Ruderman Feuer: A true financial hardship would be someone who won’t be able to pay their bills. They are going to be thrown out of their apartment or their house. The person that it is difficult for them because of they are not making money that person does need to serve.

Most major cities have to call more than 10,000 jurors a day in order to fill jury boxes. Still, Judge Feuer says that the public should remember this:

Feuer: If everyone who has some difficulty financially if they serve on jury service is excused, you are going to have a jury of either senior citizens or very rich people. That is not a cross section of our society.

Here in California, there are no plans to raise the jury payment from $15 a day. But there is another solution that some local court systems are trying: sending out even more jury summons.