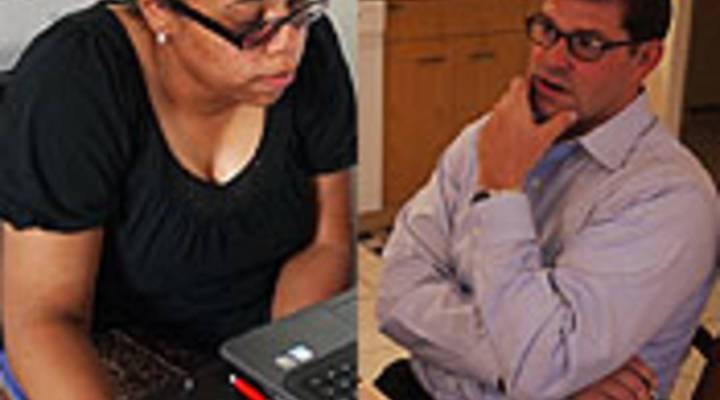 COPY
Iris Bess (left) and Steve Ostrowski, both 38. Bess has laid from a $50,000-a-year HR job and works odd jobs. Ostrowski quit his six-figure job as an ad salesman in the publishing industry to get his MBA and hasn't gotten a job since. Josh Rogosin/Marketplace

Iris Bess (left) and Steve Ostrowski, both 38. Bess has laid from a $50,000-a-year HR job and works odd jobs. Ostrowski quit his six-figure job as an ad salesman in the publishing industry to get his MBA and hasn't gotten a job since. Josh Rogosin/Marketplace
Listen Now

Tess Vigeland: 15 million unemployed people in this country. It’s a number you hear a lot these days. But it’s kind of like the abstract ones we’re get out of the Gulf coast — 60,000 barrels of oil a day, 70,000. Doesn’t really help you grasp the enormity of the problem. So we decided to come here to Chicago, to get a sense of what it’s like to go long stretches without a paycheck.

More than half a million people are currently looking for work in the Windy City. The increase in job seekers last year was the second biggest of any metro area in the country, topped only by the city we traveled from — Los Angeles. And a recovery isn’t coming to this state any time soon; Illinois ranks 48th in job creation.

So what does that look like at ground level? We found two of those 15 million unemployed Americans, and asked them to share their stories with us.

Miles Bess: Come on guys you want to watch TV? come on PBS Kids time, have a seat…

Miles Bess didn’t have to ask twice for his kids to park themselves on the living room couch. Six-year-old Isaiah…

And his four-year-old brother Anthony licked peanut butter off spoons while dad checked e-mail, and mom Iris washed up dishes from lunch.

Miles: Well, my game starts at seven, so until then I’ll probably be on the computer… huntin’, OK?

Hunting for a job, as he’s been doing for the last month after being laid off from his $32,000-a-year IT sales position. The second job loss in as many years.

The Besses: Iris is 38, Miles is 39, live in the Avalon neighborhood on the city’s South Side. Boxes fill the small rooms of their Chicago bungalow-style home, because within a couple of months, they’ll be moving out.

Iris Bess: The house can be a strain when you decide “do I put them in Little League or do we do repairs?”

So they sold — at a loss — and will become renters. Iris worked her way up from coat checker to a managerial position at Chicago’s convention center, but was privatized out a few years ago. Then, she got a $50,000-a-year job in human resources, and lost that one two years ago to the bad economy. She’s since gone to a trade school and now sells her services at pamper parties.

She’s also teaching at a beauty school and taking odd jobs through a program called “Put Illinois to Work,” part of last year’s federal stimulus package. But it’s not enough.

The Besses have cut their expenses to the bare necessities. But the situation has never been this dire.

Miles: Push come the shove, I’m gonna find a way to take care of my family.

Miles: That is a good question — whether it’s self employment, multiple jobs, however the case may be. You know, even if we wound up on the street, I’d still be able take care of my family. I would find a way.

Vigeland: How close to that are you? Are you anywhere near that?

Miles: Closer than one would want to be. I would say less than two months.

Thirteen miles north of the Besses, in a high-rise apartment half a block from Chicago’s Magnificent Mile, Steve Ostrowski is also searching for a job.

Steve Ostrowski: Orlando Magic is hiring! I’d have to move to Florida, though, I don’t think we’re gonna do that yet.

He’s at the computer in his bedroom office, scouring listings from his college alumni network.

Ostrowski is 38, married, and after graduating from Northwestern, spent 14 years as an ad salesman in the publishing industry. In 2008, he quit his six-figure job to go get his MBA.

Steve: Exactly 30 days before Lehman Brothers and all the fun started to happen, so my timing was really bad, to say the least.

That incredibly awkward laughter? A common sound in households of the unemployed.

The Ostrowskis are not anywhere near the edge that the Besses are. His wife still has her job, but his lack of income is forcing choices they never expected to make.

Steve: It has slowed down our family planning process, to be quite frank with you.

Vigeland: So you were hoping to have kids by now?

Steve: Yeah. But I think the other big challenge has just been not working. Not being around people every day. Not being a viable part of society, ’cause you start to feel as if you are an outsider looking in.

Iris: Can you hold tight until I get dinner done, OK?

Iris Bess has combated that particular challenge, being an outsider looking in, by cobbling together enough work to deal with the family’s bills. These days, they’re deciding from month to month which ones will get paid. So you’d think at this point that a job, any job, would get an automatic “yes” from Miles.

Miles: There are jobs out there, but it’s a matter of what you are willing to do.

Vigeland: And what are you willing to do?

Vigeland: Even though you say you’re a couple of months from being on the edge?

That’s a calculation so many of today’s unemployed have to make. Take whatever job you can out of desperation, and perhaps, set yourself back years in your career. Or wait. And wait.

Steve: Tonight is going to be a large salad with chicken breast, roasted chicken breast, that I made earlier in the day. So one of the advantages of being home is I can make a good solid dinner and have it ready when my wife gets home.

So far, Steve Ostrowski hasn’t been offered anything to even turn down. And most of his interviews, he says, have been for jobs that may open in the future.

Steve: You know, you go through peaks and valleys. Some days you’re really positive and energized, ’cause you’ve gotten some good leads. And then when those don’t work out, it’s really, really deflating. And I’ve been willing to take steps backwards to move forward.

Miles: These are situations that you will probably see your neighbors going through. Personally, in our circle, we know people who have had to uproot their families. Our parents was probably the last generation to have a job tenure of over 15, 20 years. Nowadays, it’s like you get a five-year run, you’re doing good. And what we’re going through is the microcosm of the world. It’s happening everywhere.