American’s may worry about getting too much radiation, which raises the risk of cancer. But according to this article from the AP, we don’t get too much radiation from airport scanners or cell phones or even microwaves. Nope, it’s from too many medical tests.

Americans get the most medical radiation in the world. The article says: “The U.S. accounts for half of the most advanced procedures that use radiation, and the average American’s dose has grown sixfold over the last couple of decades.”

Among the procedures that Americans may be overusing is imaging. The use of CT scans, for example, has soared in use over the last decade, taking the place of tests that don’t require radiation.

From the AP article:

Radiation is a hidden danger — you don’t feel it when you get it, and any damage usually doesn’t show up for years. Taken individually, tests that use radiation pose little risk. Over time, though, the dose accumulates.

Doctors don’t keep track of radiation given their patients — they order a test, not a dose. Except for mammograms, there are no federal rules on radiation dose. Children and young women, who are most vulnerable to radiation harm, sometimes get too much at busy imaging centers that don’t adjust doses for each patient’s size.

That may soon change. In interviews with The Associated Press, U.S. Food and Drug Administration officials described steps in the works, including possibly requiring device makers to print the radiation dose on each X-ray or other image so patients and doctors can see how much was given.

The article also says the FDA is pushing doctors to set standard doses for common tests, like CT scans. It also lists questions to ask about radiation scans: 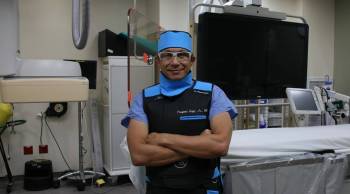 In the X-ray lab, gear is key