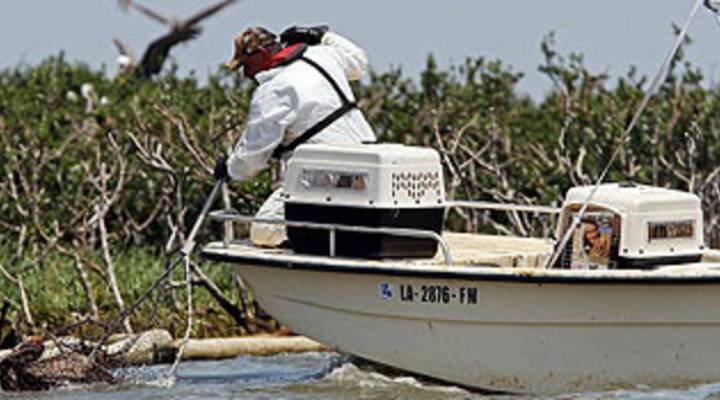 BP on the hook for billions in claims

BP on the hook for billions in claims

President Obama seems to have found his rhythm on the BP oil leak and he’s sticking to it. Much as he did last Friday on a trip to Louisiana — using the exact same words, in fact — today at the White House the president said the company needs to take care of businesses and people who’ve been hurt by the leak.

“I do not want to see BP nickle and diming these businesses that are having a very tough time,” said President Obama.

Government regulators met with BP today to set up more efficient way handle payment of claims. Coast Guard commandant Thad Allen said BP needs to be quicker and more regular about it. The company says it’s paid out nearly $50 million in claims so far, which got us wondering: How many claims are there? Who’s filing them? And how much are they getting?

David Veal is executive director of the American Shrimp Processors Association in Biloxi, Miss. He says BP has been reliable about paying shrimp fisherman $5,000 a month.

But, “this is the peak season, many of these guys could be making thousand of dollars a day, and BP has reimbursed them so far $5,000. Their commitment is to reimburse them fully,” said Veal.

Veal says the processors he works with haven’t gotten any compensation yet, and running their businesses often costs tens of thousands of dollars a day.

“This is so large and involves so many people, no one knows how to manage it and how to exchange information,” he said.

Veal says thousands of individual claims have been filed so far, but what people ask for varies wildly. Attorney Richard Arsenault is representing fishermen, shareholders and others in claims against BP. He says in this case, the laws get really complicated.

Maritime law expert Tom Gallagan says the Oil Pollution Act, or OPA, passed in 1990 after the Exxon Valdez disaster, opens BP up to suits from states for environmental damage and from businesses indirectly affected by the leak.

“Some claims that wouldn’t have been recoverable before are recoverable now, so the range of potential economic loss claimants has really been broadened by OPA 90,” said Gallagan.

BP is certainly on the hook for billions of dollars, says attorney Richard Arsenault. He says if the company is judged to have been reckless, that could mean punitive damage that double or triple what BP will owe.

In 1984, tragedy struck India when toxic fumes were released from a pesticide plant owned by the Union Carbide Corporation. The leak at the Bhopal, India-based plant killed as many as 3,500 people. Just today, eight former employees of the corporation were found guilty of criminal negligence — a time span residents and businesses of the Gulf Coast may want to keep in mind.

“Simpler the matter, the quicker it’s resolved. But in a case involving multiple jurisdictions and multiple actors with all kinds of cross claims involving insurance companies and regulatory authorities — it takes a long time to sort out,” said Charles Elson, who runs the Center for Corporate Governance at the University of Delaware.