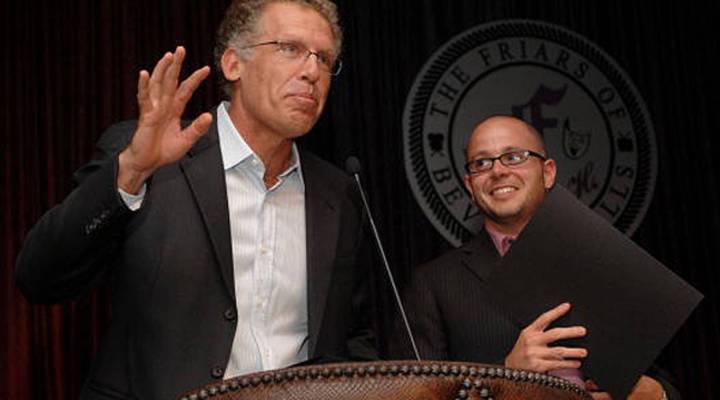 The television show, “Lost,” premiered in September of 2004 on ABC. The drama about survivors of an airline crash was the most expensive pilot ever filmed. Characters like Jake, Sawyer, Kate, and Locke, became part of popular culture. So did plot points like the Dharma Initiative, the Smoke Monster, and the hatch.

Along the way the show blossomed into a fan favorite. Countless blogs, podcasts, and message boards have debated every detail of the show.

Damon Lindelof and Carlton Cues are the executive producers of Lost. Blame them if you got hooked on the show like millions of others. Blame them if you can’t understand why people talk about a sideway-alternative reality or a fake Locke or a Constant. So what do they think about the final show?

CARLTON CUSE: We’re actually very happy with the finale. We expect that there will probably be all sorts of reactions but I think we can honestly say that we made the finale that we wanted to make.

DAMON LINDELOF: Ask us again in a year.

Advertising Age reported in March that ABC is charging Superbowl type commercial rates for Sunday’s finale — almost $900,000 for a 30-second spot. That’s almost four times the ad rates from last year on Lost. It is fair to say that the publicity around the series finale rivals the end of other trendsetting shows. I asked them how other television finales inspired the Lost finale.

LINDELOF: As writers and as fans of television obviously we have this lexicon of great finales throughout history. One of the ones we talk about a lot is “M.A.S.H.” and the other one was “The Sopranos” because it happened so recently.

In a lot of ways just getting to the point where people care about your finale and there are any expectations whatsoever is an accomplishment that we weren’t sure that we were going to achieve.

To put on top of that achievement — making the finale satisfying to everybody — was something that we knew we could never really accomplish. So we set out to just please ourselves, which is the way we’ve been writing the show from the word go.

That doesn’t mean we don’t care about the audience, we really do. But when you set your sights on saying we’re going to do something that makes everybody happy, that road leads only to madness.

CUSE: Or paralysis in combination with madness.

Here’s the thing — madness might be the way to describe how you might feel after watching the show’s finale. It is probable that many of the show’s mysteries will remain unsolved. Will those mysteries be resolved in the series finale.

CUSE: We have no intention of doing another “Lost” story and we didn’t purposely embed this with any sort of a sequel or setup.

Of course, it’s impossible to make something sequel proof. In the second “Terminator” movie Arnold Schwarzenegger burned up in molten metal but they still made two more movies and a television series based on that franchise afterward.

We honestly expect The Walt Disney Company — they own this brand — they will want to do other things with “Lost” and that’s okay.

We knew that we only had one chance to say that it’s over this time and if we come back a year or two from now and say we have plans for a movie it completely dissipates the importance of everything that we did this time around. Why call something a finale if something happens after it?

The end is the end, as Damon and Carlton have said. But they’ve also, unlike other shows in the past, really made an effort to have a relationship with fans. They have their own podcast. They’ve attended fan conventions. And they’ve apologized for some of the show’s plot points.

LINDELOF: The show has had to find ways to break through the fourth wall and communicate directly to fans, most recently in the third season when we decided to bury Nikki and Paulo alive, who the fans totally and completely reviled. We wanted to let the fans know that we were doing it for them.

We need to be held accountable for the show. We need to find a way to communicate with the fans and create the sense that we hear what they’re saying and in some cases present them with the brutal truth, which is we’re sorry you don’t like it but that’s what we did. In other cases, we can apologize. We can say we’re sorry you don’t like it. You’re right. Steps are being made. We’re going to get the troops out by 2011.

It’s a shifting conversation but it is really, really important to us that we have that dialogue with the fans.

Every morning for six years Damon and I have had breakfast in my office and we talk about the show. We basically have had this rule if we both think an idea’s cool it goes in the show. And if we’re not quite at that point we rework the idea, we talk about it a lot more, we discuss it with the writers and our various other collaborators and then we get it to a point where we’re excited about it.

When we approached the finale we talked a lot about how that was really the only valid criteria. That criteria got us through all the other episodes. You can’t be too outward focused, you have to be inward focused. But in so doing we then stand by the show. We made the show that we wanted to make.

We understand that not everyone is going to be happy with it when it ends. Some people are going to be upset that there particular question didn’t get answered, or they might not like the choice of resolution.

We’re not going to make excuses for it. In fact, we’re excited about it. We like it. If we were fans and we were watching the “Lost” finale I think that we’d feel satisfied ourselves when it was all over.