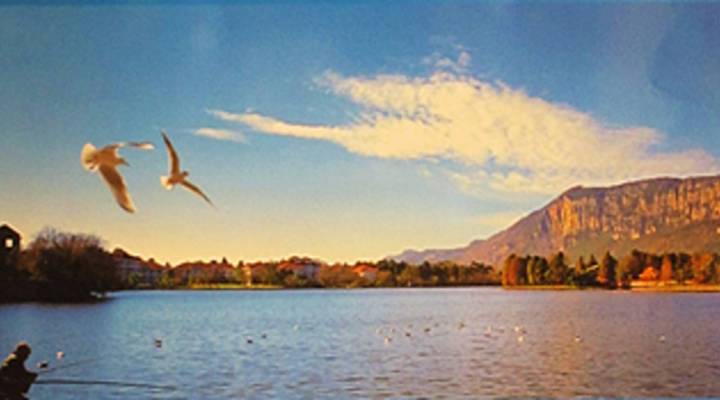 Only one thing is off about this Dianchi Lake brochure. The water is actually pea green. Marketplace/George Judson
Reporter's Notebook

Only one thing is off about this Dianchi Lake brochure. The water is actually pea green. Marketplace/George Judson

On our last official day we drove to the outskirts of Kunming, the capital of Yunnan Province, to look at a dead lake.

Yunnan, in China’s southwest, touches Tibet, Burma, Laos and Vietnam. As a border province, it has many ethnic minorities. Green Lake Park, in Kunming’s center, is filled with music as different groups perform their music and dances.

Because of the border, Yunnan also has heroin, and was the first province to have a large number of AIDS cases, from needle use. It’s unclear how many people in China have AIDS. We heard different numbers, and even the highest “official” one — from the Minister of Health — seems implausibly low: 740,000, in a population of 1,300,000,000.

On the search for facts
But for a fact-finding mission like ours, organized by the International Reporting Project for a dozen senior editors, facts are elusive. In part it is the nature of the trip, which necessarily samples subjects and places. It is also China.

Groups like ours must have an official sponsor. Ours was high-level, the State Council Information Office, the voice of China. Its minister, Wang Chen, declared this year that China must get out its message: “booming development and cultural openness.” File our trip under openness. But on its terms.

The information ministry worked with the International Reporting Project to arrange our itinerary. It helped us see some things. It didn’t help us see other things. One of its people traveled with us, and the provinces and municipalities sent their minders, too. It would be rude not to.

A dead lake in a lively city
The dynamics were evident on our last day, when we drove to Dianchi Lake. Dianchi, China’s sixth-largest lake, was doomed from the get-go. On a plateau, it’s 25 miles long and shallow. No river feeds it, only rain and the runoff from the surrounding basin.

So there’s no way for the lake to flush the sewage and industrial waste from a small provincial capital of oh, 4 million people. One that’s growing so fast it takes an act of imagination to picture what Kunming was like 10 years ago, let alone 1,000.

Dianchi was so far gone when the government took notice that on China’s pollution scale of 1 to 5, Dianchi was in a sixth category, “beyond 5,” a water expert told us. It was a big stinking lake.

Reclaiming the land
We asked to see the effort to clean up Dianchi, and to visit some villages along its shore. Several water-treatment plants have been built, but supposedly factories on the lake have also been closed, and farmers have been told they can’t grow crops within a mile of the shore. According to the agency managing the effort, 5 million head of livestock have been removed from the basin.

But no villages, we were told; our bus wouldn’t fit below an underpass. In other words, more officials, no real people.

What we were shown was a wetlands that had just been built along a stretch of shoreline next to the city proper. Lakes like Dianchi choke on too much nitrogen from fertilizer runoff and sewage; the plants in wetlands help clean the water by using nitrogen to grow.

That made sense. But we noticed two things. First, the new wetlands was much prettier than wetlands need to be. It was garden-like in its design, and had a boardwalk with lookout points running through it.

Second, facing the wetlands were big, new, expensive single-family houses with water views. Some real-estate developer made a killing.

Built on a culture of corruption
Local government corruption is a huge issue in China. It’s the focus of tens of thousands of protests every year. A lot of foreign businesses are concerned, too. How are decisions made? Is the playing field level? So we asked.

And here are a few points we were told, by officials showing us the wetlands and officials who briefed us at the reclamation effort’s headquarters:

When were these houses built? After plans to restore the wetlands were made public? No. The houses were built 10 years ago, on spec, when the lake still stank. The developer got lucky.

Do developers contribute money for the wetlands restoration? Yes. Did that influence the decision to build this new wetlands? No. Different agencies are involved.

The government isn’t building new wetlands. It’s restoring ones that had been destroyed, to heal the lake.

With one exception: the wetlands next to those McMansions are new, built to improve the appearance of the shoreline.

This is not a neat tidy package. Particularly when the houses directly on the waterfront, the ones with the three-story atrium living rooms, are obviously still under construction. In the United States, you’d certainly think somebody used influence. But that’s what we got. It was time to move on.