Steve Chiotakis: Five paintings, worth more than half-a-billion dollars, were stolen from the Paris Museum of Modern Art. Police say works from Pablo Picasso and Henri Matisse among others were taken in a brazen heist last night. It’s certainly not the first time we’ve seen very expensive works taken from their displays. Antonia Kimbell is recoveries manager for the Art Loss Register. It’s the largest private database of lost and stolen art, based in London. Good morning.

Chiotakis: You know, I think of the movies. And sometimes an art theft is arranged by a wealthy collectors who wants just one famous piece. Could that be what happened here?

Kimbell: I think it’s an impressive image — Mr. Big sitting in a car rubbing his hands together hoping his Picasso will be hanging over his fireplace. It tends to be very sophisticated criminals who trade in these artworks.

Chiotakis: And even if there were a market, there can’t be that many buyers who could afford these paintings, right?

Kimbell: Absolutely. Typically, art works can be traded on the black market for, say, 10 percent of their true value. For example, items can be traded as collateral for drugs or arms. You know, I think paintings can be circulating within the black market for a number of years before they surface again or they’re sold outside Europe, for example, where they may not be as easily recognized.

Chiotakis: What kind of insurance settlement could there be, do you think?

Kimbell: I would imagine that, the first port of call is obviously to try and recover the paintings. That’s the best outcome for everyone. For example… in another high-value, high-profile theft in Germany the insurance paid out the museum and then the museum decided a few years after that they were going to take it upon themselves to try and recover the paintings and they then paid back the insurance company a percentage of the original settlement amount so that they had rights to the recovery. Then they recovered the paintings and because of the high-profile theft associated with them, the paintings escalated in value and it’s now worth about 50 million pounds.

Chiotakis: Does this help or hurt the museum? I mean they’re missing pieces of work now. Do people stay away or do they come and see where the theft occurred?

Kimbell: I think that’s a good question. You know, publicity in any situation can sometimes elevate the profile of the museum. Unfortunately this is a negative situation. But it can have its positive effects as well — which would perhaps encourage tourism, particularly when and if they’re recovered. That would obviously increase the value of the art work and encourage people to come and see them.

Chiotakis: Antonia Kimbell, recoveries manager for the Art Loss Register. It’s the largest private database of lost and stolen art that’s based in London. Antonia, thank you for being with us.

Kimbell: Thank you very much. 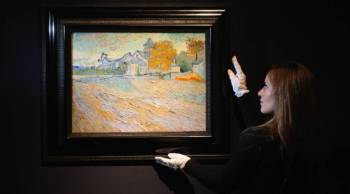