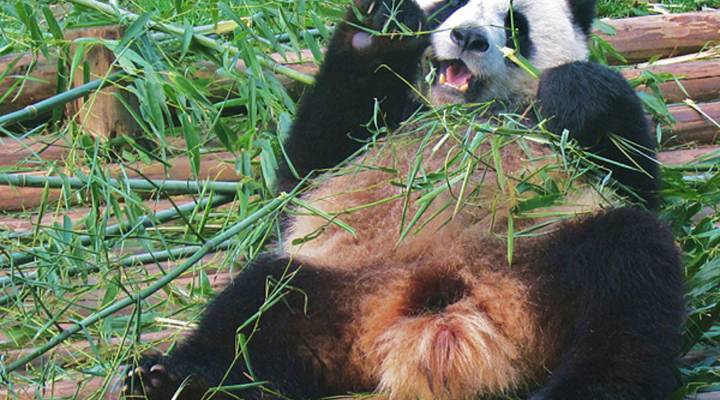 Dispatch from China: Pandas and the Rural Economy

Dispatch from China: Pandas and the Rural Economy

An immature panda at the Chengdu Panda Breeding and Research Center munches on bamboo in the Giant Panda cub enclosure. Marketplace/George Judson

We arrived a few days ago in Chengdu, a municipality of 6 million that is the capital of Sichuan Province. This is “rural” China — due west is Tibet.

Compared with Beijing, Chengdu does feel provincial. It’s a feeling… Chengdu lacks Beijing’s monumental avenues and squares, the fashion sense is not as sharp, much of the population gets about on motorbikes (Beijing banned them years ago, because of their pollution).

And the traffic is crazy. It’s easy to believe you’re surrounded by millions of new drivers. Pedestrians have few rights — this afternoon I saw a taxi bully a tiny schoolgirl (maybe six?) out of its way. “Merging” is a matter of getting there first.

Our group, organized by the International Reporting Project, is here to observe conditions in rural areas, compared with cosmopolitan Beijing. Everywhere we’ve gone we’ve heard about the need for “social stability” — the need for the Party to make sure China’s roaring economy doesn’t leave poor rural China behind.

But now that we’re here, we’re hearing that differences in income are relative. Here are two important questions: What have you been accustomed to? What are your expectations? A Sichuan farmer will answer those questions very differently from a Beijinger on the make.

Monday we drove more than an hour north of Chengdu to the village of An De, where we met a group of farmers who are part of an eco-farming experiment. The Chengdu Urban Rivers Association has worked with them to convert their farms to organic vegetable growing. The ultimate aim is to curb the pollution of the region’s rivers from chemical fertilizers.

As organic farmers, this small group was extremely atypical. But they live like their neighbors — indeed, converting to organic gardening cut their income at first. The state owns their land and their houses, and can take them if it wants them. They don’t have running water. (They do have a computer and the internet.) They rarely go into Chengdu proper. (City families do rent plots of land to tend gardens on weekends.)

Tourism is a growing industry for Sichuan Province, which has spectacular scenery in the Tibetan Plateau. A main reason that visitors, both Chinese and foreign, come to Chengdu is to see the Chengdu Panda Breeding and Research Center. We stopped there, too. See the photos.