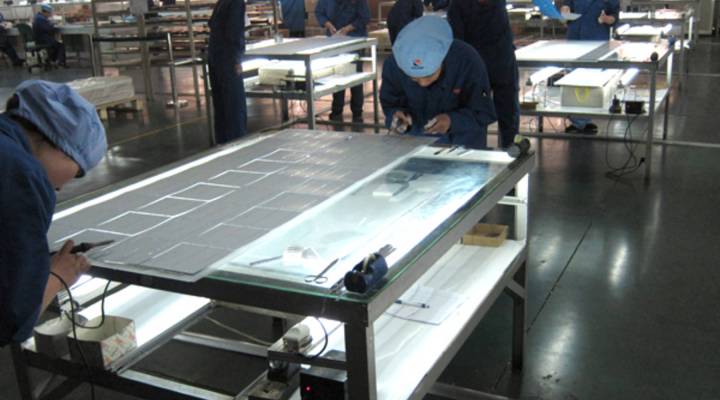 Dispatch from China: Powered by Solar

Dispatch from China: Powered by Solar

Today’s destination: the Beijing Hope Solar Power Co., about 25 miles southeast of the central city. Far enough out, there were rice paddies in the neighborhood.

China is first in the world in hydropower, first in solar, third in wind but with a bullet. As it turned out, Hope Solar is not why China leads in its category. But it offers a couple of lessons for U.S. manufacturers.

Our tour began with a quick walk-through of the factory. Quick, because there wasn’t much to it. The photovoltaic silicon wafers are manufactured in another Hope Solar plant. In Beijing, they’re inspected for flaws and assembled into panels. There’s not a lot of machinery. It’s people assembling stuff.

In a conference room, a vice general manager, Sun Yan, briefed the editors who are on this tour organized by the International Reporting Project. Hope Solar grew its revenue to $77 million in 2007, then the big recession set in. Most of its exports go to Europe; it’s waiting for Underwriters Laboratories approval in the U.S.

When Hope Solar talks about its R&D, Sun said, a lot of it is applied research: learning what customers want and figuring out how to provide it. Besides big solar panels, Hope makes solar streetlights, a solar flashlight, a solar briefcase and a solar backpack.

In other words, Hope isn’t in the same league as Suntech Power in Shanghai, the world’s leading solar-energy company. Suntech panels are lighting China’s Pavilion at the Shanghai World Expo. Far from it. But Hope is hungry to grow.

Lesson #1: This isn’t rocket science. It’s assembly work, and it is not at all intimidating to see. American companies should be able to compete.

Lesson #2: Well, there is the pay. Sun said an inspector, for example, earns about 2,000 yuan a month, which works out to something like $3,500 a year. Most of the workers are migrants from rural areas and get a dorm room for free. Local workers who already have a home are paid a housing allowance.

That’s not bad — $3,500 is just below China’s per capita income, and it’s much higher than wages in rural provinces. Yet it’s less than a fourth what a U.S. worker would get, earning just minimum wage. If we compared it to the U.S.’s per capita income… let’s not.