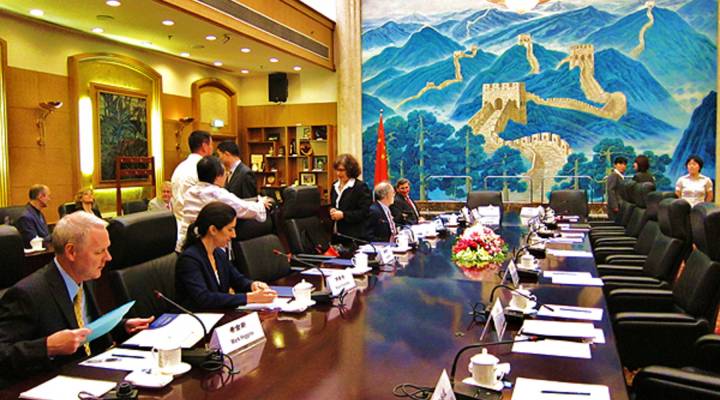 Our visit to China's Ministry of Health included a candid discussion with Dr. Chen Zhu, the minister of health, who is campaigning for healthcare reform for the 1.3 billion people in his country. Marketplace/George Judson
Reporter's Notebook

Our visit to China's Ministry of Health included a candid discussion with Dr. Chen Zhu, the minister of health, who is campaigning for healthcare reform for the 1.3 billion people in his country. Marketplace/George Judson

Imagine you’re in the capital of a country discussing health policy with a top government health official. He’s a doctor and a molecular biologist. And he’s campaigning on health care reform.

I’m on a stop here with a dozen other senior journalists meeting with some of China’s top party officials as part of a tour organized by the International Reporting Project.

Today, is our official China day. After we meet with the Ministry of Health, we will head to the State Council Information Office to meet Minister Wang Chen, who oversees the news media and the internet. Delegations like ours require an official sponsor, and ours is the Information Office.

Then we’re off to the National Development and Reform Commission to meet its vice chairman, Xie Zhenhua, who led China’s delegation to last year’s Copenhagen talks on climate change.

Right now we’re in a very formal meeting room with Dr. Chen Zhu, the minister of health. We will find today that he is unusually forthcoming.

Dr. Chen is only the second Minister who is not a Party member — but it is also an unusual moment in time. China and the United States are both wrestling with their healthcare systems, but on this issue they are not in conflict with each other.

Dr. Chen say he’s concerned about the tens of millions of citizens without health insurance. He suggested that the system’s incentives waste billions of dollars by encouraging over-treatment and over-prescribing. And he’s campaigning to force doctors to treat patients based on solid evidence of what is effective. But he worries that there’s a limit to what his country can spend.

Now he’s looking to the United States for good ideas.

China launched its healthcare reform last year. The most important goal is to provide universal primary care for 1.3 billion people, from affluent strivers in cosmopolitan cities like Beijing to peasants and nomads in poor western provinces. The country’s stability is at stake, as the income gap between rich and poor widens.

Dr. Chen talks about three insurance plans that, together, are expected to cover 90 percent of the population. Understanding insurance is difficult, as we’ve seen in the U.S., and a 90-minute interview with a dozen journalists is not the place to master the details.

The government has pledged $125 billion in new spending, and most will go to subsidize insurance. Asked if that is enough, Dr. Chen said, “Sometimes it’s better to make good use of money, than asking for more money.” So China needs to manage its system better.

Will work for prescription drugs

In China, doctors are paid very little. Hospitals, too. So both look for ways to generate income. Since they are paid a small amount for each thing they do, they do more things.

The main result is that doctors over-prescribe drugs — the most expensive ones they can find. For each prescription, they get a fixed share of the cost — 20 percent. But that means to increase their income by $1,000, they must prescribe $5,000 of drugs. Many of the prescriptions are completely unnecessary.

“They are encouraged to use more drugs and more expensive ones, because the markup is steady, Dr. Chen said.

His solution? Pay doctors and hospitals for treating the condition, not for procedures and drugs. You heard this a long time ago in the U.S.: DRGs, or diagnosis-related groups. China is also setting up a research center patterned after the United Kingdom’s National Institute for Health and Clinical Excellence, to determine the most effective treatments.

You heard that one during the healthcare debate in Congress: evidence-based medicine.

As in the U.S., China also knows the demand for healthcare is going to grow sharply. It has a large aging population. And growing affluence means more diseases caused by lifestyles. According to one study, Dr. Chen said, the incidence of diabetes quadrupled between 2002 and 2008. People must be encouraged to eat better and exercise more.

“Certainly I’m not recommending we’re going to shut down all KFCs,” Dr. Chen said.” I don’t think if a person goes to KFC one time a year, that will cause a problem.”

Well, maybe for KFC, which is everywhere in China. After all, that would be only 1.3 billion sales a year.