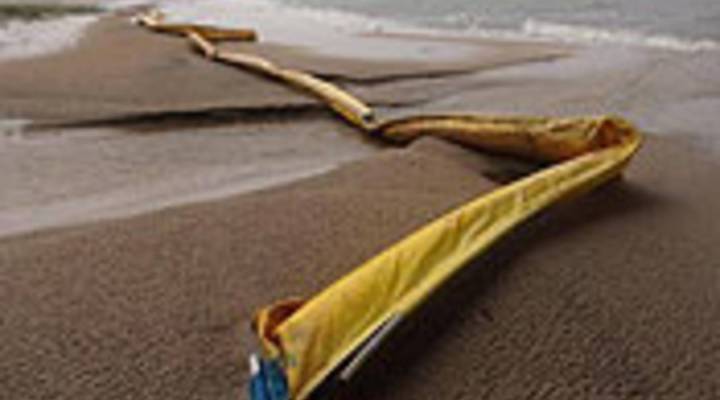 COPY
An oil boom is seen washed ashore as the rain and high wind make it difficult to lay the booms out so they stay in place in an attempt to protect sensitive areas from the massive oil spill in the Gulf of Mexico in Bay St. Louis, Miss. Joe Raedle/Getty Images
BP Spill: Ripples

An oil boom is seen washed ashore as the rain and high wind make it difficult to lay the booms out so they stay in place in an attempt to protect sensitive areas from the massive oil spill in the Gulf of Mexico in Bay St. Louis, Miss. Joe Raedle/Getty Images
Listen Now

Stacey Vanek-Smith: The massive oil leak in the Gulf of Mexico continues to pump out more than 200,000 gallons of oil a day. Congressional hearings about the spill begin on capitol hill today; expect a big corporate blame game between BP and other companies that worked on the faulty rig. And the Obama administration wants to split up the agency that oversees offshore drilling. John Dimsdale has more.

John Dimsdale:The Minerals Management Service is a 1,700-employee agency in the Interior Department with a dual mission. It not only enforces oil drilling regulations — it grants drilling leases and collects more than $10 billion a year in royalties from oil companies. A 2008 internal investigation found conflicts of interest and “a culture of ethical failure.”

Today, Interior Secretary Ken Salazar will say the massive oil spill in the Gulf makes reforms more urgent. He’ll call for separating the Service into a regulator that inspects oil rigs and enforces safety rules and a second agency to collect royalty dollars.

Since the spill, the Interior Department indefinitely suspended proposed oil and gas leases off the Virginia coast. And the White House announced no new offshore oil leases will be issued until drillers install new safeguards to prevent another spill. What safeguards will be necessary depends on investigations into what exactly happened to the Deep Water Horizon well.

Stacey Vanek-Smith: Oil is less than $76 a barrel this morning. That on worries that the euro could falter and slow global growth. Meanwhile, the massive oil leak continues to pump more than 200,000 gallons of oil a day into the Gulf of Mexico. Later today, President Obama will propose splitting up a key agency that oversees offshore drilling. The Associated Press reports this morning the administration will divide the Minerals Management Service in two and separate safety enforcement from the collection of billions in drilling leases. Congressional hearings also start today into what caused the oil leak. Our Washington bureau chief John Dimsdale joins us live. Good morning, John.

Vanek-Smith: So John, What’s going to go on in Washington this morning?

Dimsdale: Well I think as the financial and legal liabilities begin to sink in here, there will be lots of finger-pointing.

Vanek-Smith: Well I guess that’s not so surprising. Who’s fingers?

Dimsdale: The chairman of BP America will be here, BP was the one who applied for the well permit and owns the oil. The owner of the drilling rig, Transocean, will send its CEO. And then there’s the contractor that installed a cement casing around the well head, Halliburton. Plus, in a hearing tomorrow, the manufacturer of that blowout preventer, Cameron is the name of hte company, will testify.

Vanek-Smith: That’s quite a lineup. What are they all expected to say?

Dimsdale: Well we still don’t know what happened 5,000 feet below the surface of the water, but each company has come up with reasons why it wasn’t their fault. The rig’s operator, Transocean, will point out that the cement casing may be to blame. The cement contractor, Halliburton, says their job was complete and it had been tested. And they’ll say it was the well owner, BP, that may have decided to pump oil too soon. BP will say that of the 126 employees on the drilling rig, only seven were BP employees. And all three companies will question why the blowout preventer, made by Cameron, supposedly a fail-safe piece of equipment, failed to stop the leak.

Vanek-Smith: So if all that is true, why is BP the one in all the headlines?

Dimsdale: BP applied for the permit, they own the oil, they own the well, and they certified in the environmental impact statement that they would be respond for any spill.