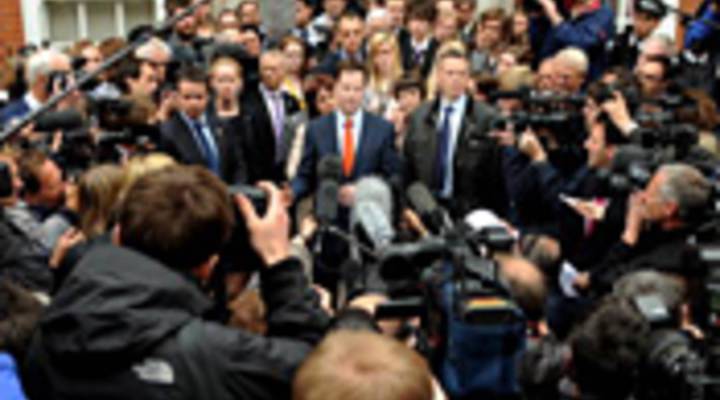 Vanek-Smith: So Stephen, what happened here? Who won?

Beard: No one. Everyone lost. All three main political parties did worse than they were hoping. The result is a hung parliament; that is, parties have to form a coalition or other kind of alliance to form a viable government. It looks like Gordon Brown’s Labour Party is out and the conservatives will be in, but it could be hours, perhaps even days of horse trading before we know for sure.

Vanek-Smith: So there’s a lot of uncertainty then?

Beard: Yes, very much so, and investors don’t like that. The pound has taken quite a beating — 3 cents down against the dollar. It’s even fallen against a falling euro. Investors are worried, of course, about the U.K.’s huge budget deficit and whether the new government is going to be strong enough to tackle it, to make the necessary painful cuts in public spending. Matthew Taylor, an advisor to the former prime minister, Tony Blair, says the problem is none of the parties have spelt out how much pain is on the way:

Matthew Taylor: To create a kind of a coalition which then sustains you through doing things that weren’t in your manifesto and aren’t popular with the public, well that’s pretty tough.

So some tough times ahead for the U.K., perhaps some Greek-style unrest here, and some anxious moments for investors as they wait over the next few hours — and perhaps days — to find out who’s going to be the next U.K. prime minister.