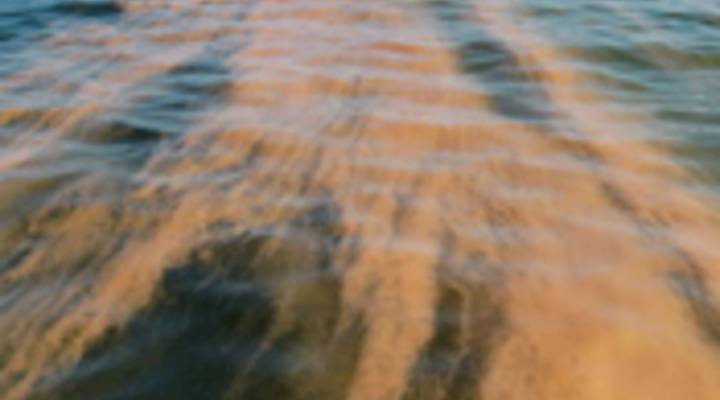 Orange-colored chemical dispersant flows through the water off the coast of Louisiana to help the massive oil spill. Joe Raedle/Getty Images
Listen Now

Stacey Vanek-Smith: A ship carrying a 100-ton concrete and steel dome arrived at the oil leak site in the Gulf of Mexico. BP plans to drop the dome over the leak site, which is spitting more than 200,000 gallons of oil into the Gulf every day. It turns out Transocean, the company that built the faulty rig has had safety problems before in Britain. Our own Stephen Beard joins us live now from London. Good morning, Stephen.

Vanek-Smith: So what exactly is Transocean accused of doing wrong?

Beard: There were two violations in the North Sea that are perhaps significant in the light of the Gulf of Mexico disaster. They involve the safety device, which apparently failed in the Gulf of Mexico rig, the blowout preventer. This is the huge valve that is supposed to seal the head of the oil well to prevent oil and gas gushing out.

Vanek-Smith: So what happened in the British cases, was there an accident?

Beard: No, but British health and safety inspectors found fault with the blowout preventer on two Transocean rigs. They said the equipment was not in good working order or in good repair. The company was ordered to put things right, which it did. It’s clear that safety equipment is going to be the key issue in this story. Along with the blowout preventer, there’s also the separate question of the so-called acoustic switch, a safety device that was not fitted to the Deepwater Horizon rig. It’s not required in the U.S. — indeed only two countries in the world require it. David Doig, an oil safety expert, speaking at a big oil conference in Houston, wondered why it’s not mandatory everywhere:

David Doig: The question needs to be asked is why only two countries when we have a global industry where all the players are working across all the boundaries? You don’t work in the local environment, you work globally as a global oil company.