KAI RYSSDAL: You know that thing I say at the end of the numbers most days, the thing about the yield on the 10-year T-note? I completely understand if it goes in one ear and out the other. But those who’ve been paying attention to the interest rate on Treasury notes are noticing something kinda worrying. As the economy recovers, the yield on the 10-year has gone from about 3.5 percent in February to almost 4 percent today. Which means it’s getting more expensive for Washington to borrow.

Jeremy Hobson: Part of the reason the yield is rising is because who needs a safe haven anymore? Just as investors flocked to government bonds when the economy tanked, now they’re heading back into higher risk, higher return investments.

Guy Lebas: I’m going to say it’s 75 percent yield chasing — people moving out of treasuries into other higher returning investments — and maybe 25 percent concern about the long-term health of the United States.

He’s talking about the trillions of dollars of debt we’ve racked up as a nation, something economists worry could make investors nervous about lending to the government in the future. On Bloomberg Television Friday, former Fed Chairman Alan Greenspan said the debt picture is an early warning sign for the economy.

Alan Greenspan: It’s going to have a marked impact eventually, unless it’s contained on long-term rates. And that will make a housing recovery very difficult to implement and put a dampening on capital investment as well.

That’s because as bond yields go up, consumers often have to pay more to borrow as well. Still, Pimco market strategist Tony Crescenzi says the recent rise in yields is no cause for panic.

He says don’t forget the number 9.7. That’s the unemployment rate, which he says will hold inflation and the cost of borrowing down. And Guy Lebas points out that the most recent Treasury auctions, the ones causing all this fuss, still had plenty of bids for every dollar of debt. 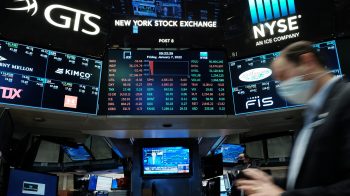