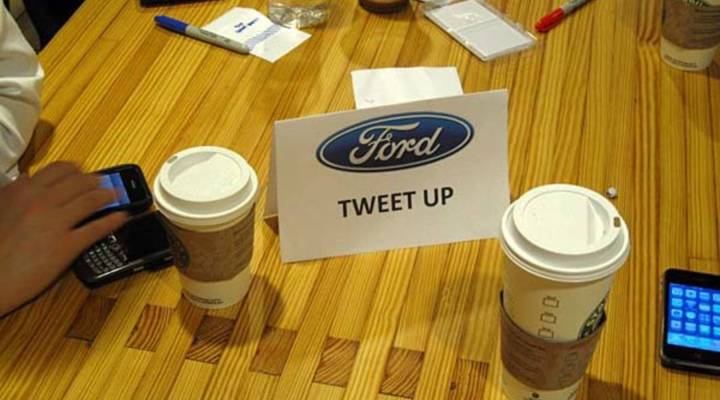 Kai Ryssdal: Here is a completely random but somehow also completely stunning Internet statistic. The research firm Hitwise reported today that 14 percent of all Internet visits last week went to just two sites. Google.com was one of them. Facebook.com was the other. It actually had more hits than Google did.

So you know what that means. It’s going to get even harder to keep up with your Facebook page. To say nothing of your Twitter feed, your LinkedIn account and all the rest. But if you think you’re having social media management issues, consider the Internet plight of big companies. Desperately trying to stay connected to their customers whose main mode of communication is fast becoming social networking.

STACEY VANEK-SMITH: At a Starbucks inside the Empire State building, about a dozen people are seated at a table, sipping coffee and hunched over their smart phones.

This is what’s known as a tweetup, a get together set-up on social networking site, Twitter. In this case, by Ford Motor Company. Ford truck owner Jack Monson came to the Tweet-up. He’s deep in conversation with the other people at the table but nobody’s actually talking.

If that just blew your mind, don’t worry. Most of corporate America has no idea what to make of it either. But more and more consumers are going to tweet-ups and Facebook pages and blogs to learn about products. So companies are scrambling to adjust, says Sam Ford. He researches social media at MIT.

SAM FORD: Corporate America really hasn’t completely caught on to how to deal with that yet. You’re telling your story directly to the customer now. That changes the game completely.

Jake Hurwitz: We’re driving the Ford Fiesta around the country…

Ford recently launched a social networking campaign around the new Fiesta, which goes on sale later this year. Ford loaned Fiestas to young people all over the country and sent them out on adventures. Ford had them blog, shoot video, and post Twitter and Facebook updates.

Hurwitz: We’re going to tweet clues about what different cities we’re in and the first two people to find us, we’re going to take them out to dinner.

The result? Thousands of Fiestas have been pre-ordered, sight unseen, and the car has better brand recognition than some Ford models that have been around for years.

Scott Monty is the head of new media at Ford. He says it took a while to get the company up to speed. When he first asked Ford’s CEO if he’d answer some questions on Twitter…

SCOTT MONTY: His immediate response was: Sure, what’s Twitter?

MONTY: Suddenly, people internally are really excited about it and see the possibilities. We no longer have to educate and convince.

That’s true at a lot of companies. And consultant Shel Holtz says people with social media expertise are in demand.

SHEL HOLTZ: If you look position descriptions for companies that are hiring in their communications department, their marketing department. They’re all looking for social skills.

HOLTZ: It’s like my head is spinning, cause I mean, I didn’t even know what a blog was five years ago.

Brian Lusk manages communications at Southwest Airlines. He’s worked there for 15 years. Lusk says social media requires transparency, which can be awkward. When filmmaker Kevin Smith was kicked off of a Southwest flight because he was considered too big for one seat, Southwest got hammered on Facebook, Twitter and its own blog.

BRIAN LUSK: I think it shows this is a company that’s gutsy enough to post these negative comments. They’re going to treat me right, because they’re not going to hide behind corporate speak.

Ford’s Scott Monty says companies are still trying to deal with being so exposed, and they’ll make mistakes. But the effort is crucial…

But Monty jokes, the other 10 percent is half the battle. If companies are smart with social media, they can build new types of relationships with consumers, and if they get it wrong, it’s going to be all over Facebook.