Kai Ryssdal: Driven in part by its need for raw materials to fuel its booming economy, China has been expanding its relations overseas. They’ve gone to Africa in search of oil, South America for minerals and raw goods. And rhose relationships, they go both ways.

Even the small Andean country of Bolivia is strengthening its ties with Beijing. Bolivia is buying Chinese satellites, it’s selling mineral rights, and it’s importing Chinese-made consumer goods. Imports that are controlled not by big shipping companies — as in many other companies — but by close-knit indigenous families. Annie Murphy has the story.

ANNIE MURPHY: A few years ago, Nelson Chambi got married. He went to work at his in-laws’ textile business in the bustling market city of El Alto. Back then, he traveled to Chile to buy Chinese-made blankets. They were doing pretty well. But then Nelson realized more and more Bolivians were buying direct from China and making bigger profits.

NELSON CHAMBI: So I said, why don’t we cut to the chase and go to China? On the bus from Chile I’d met other passengers who had traveled to Korea, Japan, even China, and I said, it can’t be that hard.

Nelson says first, his mother-in-law insisted he have an indigenous holy man read his fortune in coca leaves. His fortune looked good, so Nelson got on a plane to China.

CHAMBI: I was worried, because some people said I was going to get a shipment of rags, but the quality was great.

Nelson made a $25,000 on the shipment — no small sum in a place where the average income is just over $100 a month. The potential for new business and higher earnings has prompted many Bolivian merchants to travel to China. And they’re looking for extra skills to help them negotiate.

Meixin Chen teaches Chinese at the RGA Language Academy in La Paz. Just a few years ago, there was no demand for her services.

MEIXIN CHEN: Now I’m teaching eight classes, with a total of 50 or 60 students. Most of them are merchants who want to do business in China. They want to be able to communicate directly with factory owners to get a better price.

Aldo Feldin is one of those students. He’s dressed in a track suit and blushes a lot. He doesn’t look like a powerful businessman. His family imports fabric for polleras — layered skirts worn by local, indigenous Aymara women — and their business is one of the biggest in La Paz.

Aldo often travels to countries like Egypt, Korea, and China.

Aldo says the first time he went to China, he couldn’t communicate at all and managed to buy several containers worth of goods using only a calculator. For his next business trip in April, Aldo hopes to buy even more products, with the skills he picked up in class.

According to Nelson Chambi, the merchant importing blankets, this entrepreneurial spirit has a lot to do with history.

CHAMBI: Our people, the Aymara, often don’t have the power of education or professional training, so the majority go into the business of trade. Our grandfathers and grandmothers have always come to La Paz to sell products like potatoes and onions.

And it turns out, for these indigenous merchants, the leap from selling onions in the capital, to buying boatloads of textiles in China, isn’t that big.

In La Paz, Bolivia, this is Annie Murphy for Marketplace. 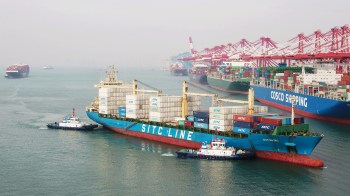