Getting pumped up for FAFSA

Getting pumped up for FAFSA

TESS VIGELAND: For those who are lucky enough to be going off to college, this is the time to be filling out lots and lots and lots of forms. And if you think doing your taxes is hard, try the Free Application for Federal Student Aid — the FAFSA. It’s the key to getting a government grant or loan. Some schools require additional paperwork, but the hunt for money starts with the FAFSA. There are free ways to get help, though — and maybe even raise your school spirit.

Caitlan Carroll: What you’re hearing is a promotion for “College Goal Sunday.” It takes that kind of over-the-top enthusiasm to get students pumped to tackle financial aid. These events are rolling out across the country in YMCAs, churches and schools to help students file their financial aid forms correctly and on time.

Man rapping: There are steps to take. There’s a job to be done. I want step one, step two, step three spelled out.

Step one is signing up. College Goal Sunday lists its schedule on its Web site. Some states run similar seminars that go by different names. California has “Cash for College.”

Woman on megaphone: Por favor, everyone needs to go to the auditorium right now.

I dropped in on a Cash for College event at Camino Nuevo High School in Los Angeles. The school’s computer lab was packed with parents and students. Volunteers from a local college’s financial aid office wore blue “Cash for College” t-shirts and shouted instructions from the center of the room.

Volunteer to crowd: How many of you already filled out your taxes for this year? That’s nobody.

Layla Fernandez dragged her brother Derek to the workshop. She’s had to nag him about college paperwork every step of the way.

Layla Fernandez: Now his concern is more like, “Are we gonna have enough money?” So that’s why I’m here, because yes, there is money, you just need to learn how to look for it.

Derek Moran: I’ve never had that mentality of, like, seeing myself in college, ’cause I grew up like not really motivated going to school and everything. But like coming here and seeing these opportunities is something, like, great.

Camino Nuevo principal Scott Weatherford says the school works really hard to get kids into college, but finances can derail those plans. Many of his students come from bilingual backgrounds and have parents with low-paying jobs. This is the demographic that has the toughest time making it to college.

Scott Weatherford: You know, last year, 80 percent of our students were accepted to a four-year university, which is a great number, but then the next step is making sure those students can pay for college as well.

And filling out the federal application for financial aid can be really overwhelming. But less overwhelming than it used to be.

The Department of Education has taken the online FAFSA form from 26 pages down to nine. It’s easier to skip past questions that might not relate to you, like the section on homelessness or military service. And your answers are used to prompt only relevant follow-up questions. Soon, you’ll also be able to import tax information directly from the IRS Web site onto the financial aid form.

Justin Draeger is with the National Association of Student Financial Aid Administrators. He says students used to have to supply countless forms to prove their financial need.

Justin Draeger: Higher education and advocates for student aid were using a lot of data to narrow in on the students who most needed limited financial resources that the federal government was offering.

But then the Department of Education realized the approach was backfiring.

Draeger: The complexity of the form and process may have been discouraging many students and, especially low-income students, from actually ever filling out the financial aid application and receiving the federal student aid they need to go to college.

A recent study showed that low-income students who received help filling out their financial aid forms were significantly more likely to attend college.

Volunteer to crowd: For parents, if you don’t have a place to sit…

Victor Gonzales came to the Cash for College event with his son Vladimir to get some of that guidance.

Victor Gonzales: For me, this workshop — they gave it to us — is really helpful, because I didn’t know nothing about it.

His son wants to attend a four-year university to study engineering. If he doesn’t get enough grants, he’ll have to go to a community college.

Vladimir Gonzales: Not that community college is bad, but if I have the opportunity to get a bigger education, I would take it, but I just need the money.

Despite the bad economy and deep budget cuts, there is more government aid available this year. Federal Pell grants are higher than they’ve ever been — $5,550 per student. Interest rates on subsidized Stafford loans have dropped by a percent, and there are tuition tax credits available.

Mark Kantrowitz is the publisher of the Web site FinAid.org. He says that’s good news because the demand for money is at record levels.

Mark Kantrowitz: So far this year, the number of FAFSAs submitted is up 20 percent year over year and that’s after a 12 percent increase the year before, which was itself a record.

Students who want financial aid will need to file their federal forms by June. But everyone I spoke to had one piece of advice:

Several voices: Apply early. Start early. I would say do it early.

And you know what early means? Now. 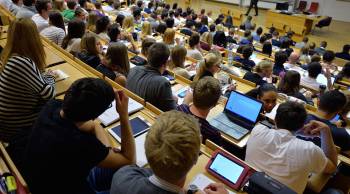