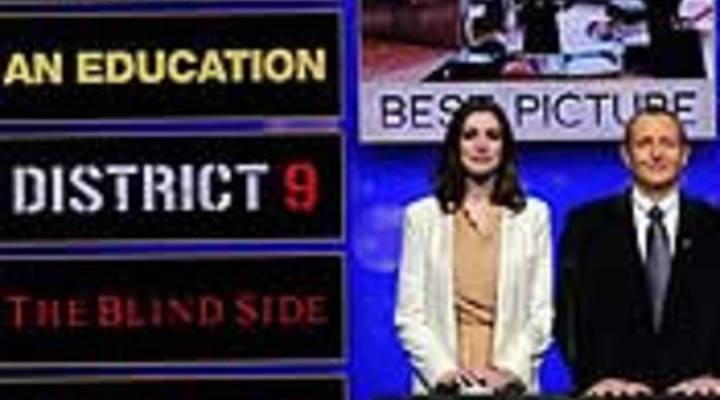 Kai Ryssdal: To lighter fare now — Oscar nominations were announced this morning. And if you believe the hype, the big contest is going to be between “Avatar” and an indie movie called “The Hurt Locker.” But even the long shots have probably already started drafting their acceptance speeches. Not just the stars, either. You know, the biggest moment on Oscar night is when the Best Picture winner is announced and all the producers file up onto the stage to pick up their little statuettes.

But when the Best Picture nominees were unveiled this morning, there were some specifics kind of missing.

All right, wait a minute. The movies have Oscar nominations, and they still don’t even know who the producers are? Marketplace’s Stacey Vanek-Smith has more.

STACEY VANEK-SMITH: The job of movie producer sounds really important and really vague. Traditionally, the producer was like the CEO: Hiring and managing staff, handling payroll, attracting investors. But since the big studios split up and everybody started getting into the movie business, things have gotten complicated.

Mark Lacter follows the business of Hollywood for L.A. Observed.

ALEX BEN BLOCK: Even worse than a catch-all, they become a joke. So many times, personal manager or the uncle of the star or somebody was able to use their leverage to say: I’m the producer.

The result was that a movie would often have more than a dozen producers, which can really be a drag on an awards ceremony. So about five years ago, the academy ruled that only three producers could accept the Oscar for Best Picture. Getting Hollywood types to stand down wasn’t easy, so the Producers Guild had to start holding hearings and snooping around.

BEN BLOCK: They will actually reach out now to people who worked behind the scenes on a movie, the maybe make-up people or cinematographers and they say: What exactly did this person do?

Ben Block says the process can be such a cat fight that sometimes producers aren’t named until just days before an awards ceremony. So, if “The Hurt Locker” or “The Blind Side” gets the Oscar for Best Picture, it’s not clear who will be thanking the academy.