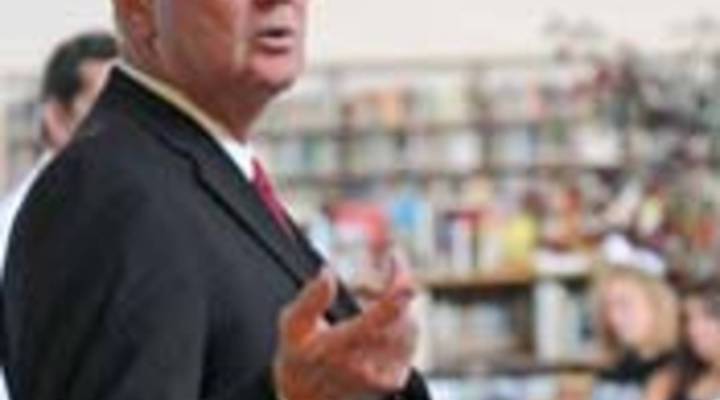 Tess Vigeland: We heard earlier about the populist anger over huge salaries and bonuses for bankers. Well university presidents can relate. They’ve been the targets of similar anger over the last couple of years. A new survey from the Chronicle of Higher Education shows the median salary for the president of a public university rose to $436,000 in 08-09, up 2.3 percent from the previous academic year. That’s a far cry from the average 19 percent raise of 2005. But the fact that there are raises at all may raise eyebrows in an era of rising tuition and cost-cutting at public schools. Jeff Selingo edits the Chronicle and joins us with the details of the survey. Welcome.

Vigeland: So it sure sounds like university’s are going the opposite direction of the banking industry. They’re not going to have any hearings about university pay, at least not this year, right?

SELINGO: Not this year, and I think that’s one of the reasons. I think the public perception about rising college costs, the states are in terrible fiscal shape, appropriations to higher education are dropping, and I think presidents don’t want to be seen as getting big pay raises this year.

Vigeland: Yeah, it was very interesting to see the list of presidents who have either turned down bonuses or raises or even given back portions of those salaries and bonuses. Is that something new?

SELINGO: That is something new. In the private sector we’ve seen some money being given back, but in the public sector you saw a decent amount of presidents this year either give back a portion of their salary increase or say they didn’t want the salary increase that was called for in their contract. And in other cases they gave back bonuses.

Vigeland: Now I want to talk to you briefly about Ohio State University. This, of course, the team that just won the Rose Bowl — the Buckeyes. But they’ve also got the highest paid public university president, I believe a million-and-a-half dollars. And yet, the football coach makes twice that. Why the outcry over school presidents specifically do you think?

Vigeland: And I guess their performance doesn’t necessarily bring in alumni contributions.

Vigeland: So they really do operate in a different sphere, then?

SELINGO: They do. And what’s surprising about that is that when people think about the biggest universities in this country, most of them are public. So these public university presidents are overseeing very big operations. Sometimes the largest employer in the state. They have multiple undergraduate and graduate schools. They have medical schools, hospitals. And, of course, they’re also overseeing these huge athletic programs. Big football programs, big basketball programs. But yet for the most part, they are paid less than some of their counterparts at private universities.

Vigeland: Yeah, you note that these public campuses, I mean they’re really almost mini-cities. Thousands of people employed in this local economy. And the argument that we keep hearing with the bankers is that, look, if you don’t offer these salaries and these bonuses you’re not going to get top talent. Couldn’t that also be argued for a university that is such an integral part to an entire local economy?

SELINGO: And that is argued by many of these universities and that’s why you saw big increases over the last couple of years. Over five years, you saw public university presidents’ salaries rise nearly 40 percent because they said that the race for talent, they needed to pay this money. So while there is, the breaks have been put on salaries at public universities, it’s probably not going to last that long, because you’re not going to get people who want to do these job given how complex they’ve become.

Vigeland: Jeff Selingo is editor of the Chronicle of Higher Education. Thanks so much for your time today.

SELINGO: It was great to be here.

Does college fail grads in the workplace?