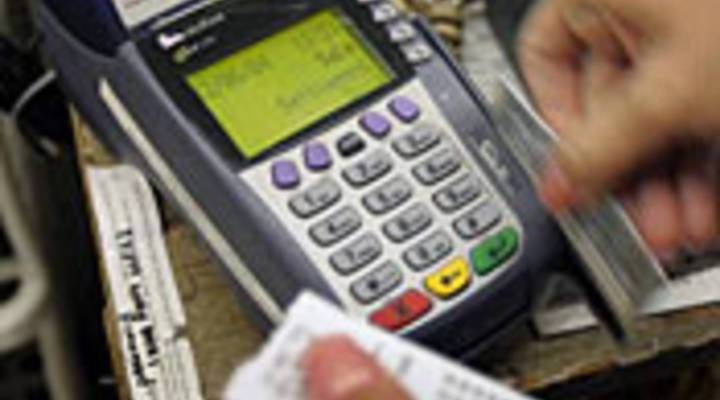 KAI RYSSDAL: You know, it’s not often you can say that a $3.3 billion corporate profit report is… eh. But that indeed has been the reaction to JPMorgan’s earnings announcement this morning. Yes, its trading and investment banking operations might as well have been printing money. Profits on that side of the business were in the billions of dollars, thanks to the stock market rally most of last year.

The bad news, though, came from credit cards. Chase wrote off a billion and a half dollars worth of bad consumer loans last quarter. Card issuer Capital One said today it’s writing off more than 10 percent of its loans.

Marketplace’s Stacey Vanek-Smith reports a whole lot of people are deciding those credit-card bills just aren’t going to get paid.

Stacey Vanek-Smith: The federal government estimates U.S. banks will swallow more than $82 billion worth of credit-card debt by the end of this year.

Mike Moebs is an economist who advises banks. He says they’ve started writing off more of that debt because collecting it takes so much work.

Mike Moebs: Instead of incurring the costs, which are expensive, because they’re labor intense, banks will say — based upon the size of the debt, the amount of interest that’s being paid — it is not worth it for us to pursue this any further.

Moebs says banks also know that paying off the plastic comes after the mortgage, car payments and utilities.

Moebs: People, they’ll do their best until the very end, and then they start working from the bottom of their priority list. And at the bottom is going to be credit cards and they’re just going to say: I can’t pay it.

Moebs says more and more people will be in that position as long as unemployment remains so high. Credit-card defaults topped 10 percent last year. This year, they’re expected to climb to 13 percent.

Ron Shevlin: The longer-term issue is that it’s been a huge driver of revenue and profitability from the banks’ perspective, and now the whole game has kind of changed for them.

With fewer credit-worthy customers and regulatory crackdowns coming from Washington, Shevlin says banks are going to have to find new ways to make up for lost fees and business.