Kai Ryssdal: Seeing Chinese companies buy up foreign brands is really nothing new. Hummer and Saab come most recently to mind. It is less common, though, to see a Chinese company use its own brand to go after Western consumers. Today China’s top sportswear company goes straight to the heart of the opposition. It’s opening a store in Nike’s hometown.

MITCHELL HARTMAN: I’m standing outside Niketown in downtown Portland. It’s sort of a museum-store-slash-shrine to the biggest athletic shoe company on the planet. And I’m talking to consumers about their shoes.

HARTMAN: What do you wear on your feet?

HARTMAN: Li Ning, have you ever heard of it?

But the company’s started slow. Two years ago, it opened its design center here. Portland’s a hub of research and development on athletic shoes. Its new showroom is in a trendy shopping district. The decor’s cutting edge, with Chinese cultural touches like a ping pong table and badminton rackets on the walls.

JAY LI: We are a great value for money. The products are quality engineered, they’re highly durable.

Jay Li is head of Li Ning USA. He says the company’s stressing more style and more engineering for the American market. It’s also getting endorsements from high-profile athletes like Baron Davis of the L.A. Clippers. And its prices are slightly lower than Nike or Adidas. Still, says Li, the company — and the country — have a long way to go to compete with global market leaders.

LI: China’s been known to be a manufacturing center. But China’s never been known to have powerful brands like the Japanese and the Koreans do. But I believe China’s time has come.

Chinese consumers surely think so. They’ve pushed Li Ning to a billion in domestic sales, and helped it compete against premium international brands in China.

Zhang Pei Shuai is a 24-year-old college student who was shopping recently at Li Ning’s flagship store in Shanghai.

ZHANG PEI SHUAI: Compared to foreign brands like Nike and Adidas, the price performance is good. Now Li Ning is catching up to the international brands. The material, fabric has all improved.

TOR PETERSEN: You dial back the clock 10 years, many of Li Ning’s products looked very similar to last year’s Nike products and Adidas products. Today that is changing. At the fundamental level, for runners and athletes, the Li Ning product can now compete.

Even so, the company faces the stigma of “Made in China,” and customer loyalty to more familiar brands, which is hard to break.

But Li Ning is playing a patient, careful game — rolling out an online store later this month, but holding off on more U.S. stores until it runs this showroom experiment in Portland.

And if the consumers I met outside Niketown are any indication, it may not be so hard to crack the U.S. market. Not one said they were worried about Chinese quality. After all, the shoes they wear now are probably made there. And they all said at the right price — under $100 pair, let’s say — they’d give Li Ning’s a try. 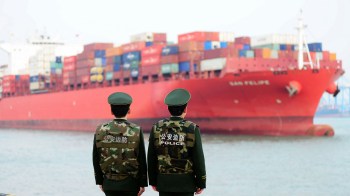 Who’s paying the tariffs on Chinese goods? A new report says it isn’t the Chinese