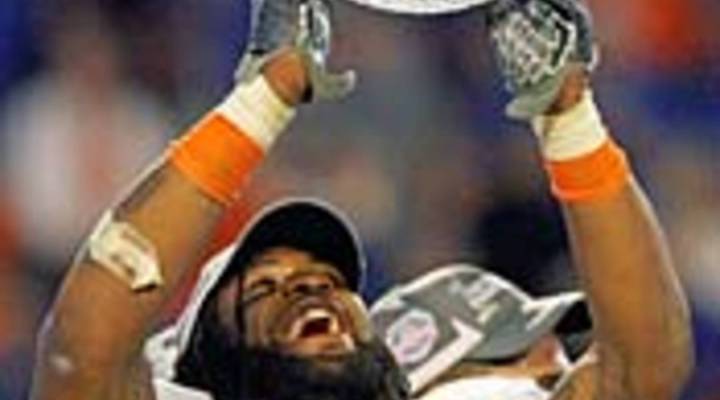 Big BCS payouts go only to a select few

COPY
Brandon Spikes of the Florida Gators holds up the winning trophy after the FedEx BCS National Championship Game against the Oklahoma Sooners in Miami on Jan. 8, 2009. Eliot J. Schechter/Getty Images

Big BCS payouts go only to a select few

Brandon Spikes of the Florida Gators holds up the winning trophy after the FedEx BCS National Championship Game against the Oklahoma Sooners in Miami on Jan. 8, 2009. Eliot J. Schechter/Getty Images
Listen Now

Kai Ryssdal: Remember back when college football bowl season meant just a handful of games, all or most of ’em on New Year’s Day? Things are a little bit different nowadays. We’re not quite halfway through all of this year’s bowls, even though 14 games have already been played. We’ve got 19 to go, including five in the Bowl Championship Series. BCS for short. They’re the big money games. Lots of cash. And lots of controversy. Nancy Farghalli reports.

NANCY FARGHALLI: First thing you need to know about being a Rose Bowl volunteer — wear comfy shoes. You’ll be walking the stairs of Rose Bowl stadium in Pasadena a lot. Your job? Making sure every ticket has a corresponding seat.

The stadium will not only have its namesake Rose Bowl game tomorrow. The BCS National Championship game will be here, too, next Thursday.

Mitch Dorger is the CEO of the Pasadena Tournament of Roses. The organization is hosting both events.

MITCH Dorger: We believe the total impact on the greater L.A. area is gonna be between $350 million and $400 million for both games. That’s as good as it gets for us.

But the BCS isn’t rosy for everyone. Some consider it downright thorny. It’s an exclusive club of six college athletic conferences. They get an automatic bid to a BCS Bowl and a guaranteed payout of $18 million in TV revenue and ticket sales. It’s not a traditional playoff system, like what you see in college basketball. Instead, the BCS relies on a computer ranking system.

Paul Swangard teaches sports marketing at the University of Oregon.

PAUL Swangard: The BCS, which is probably more confusing than a lot of the introductory math classes here at the University of Oregon are taught, gives us two teams at the end of the session of the regular season that will play ultimately in the last bowl game for the national championship.

The system has been a magnet for controversy. But member conferences don’t seem to be in much of a hurry to come up with an alternative. In the last four years, they’ve taken in nearly a-half-billion dollars at bowl time. That’s compared to just $62 million for conferences that aren’t members. Swangard says the BSC has created a system of have and have nots.

Swangard: Those on the outside of the pot of gold want to see if they can reach a hand in on a more regular basis.

Meantime, some lawmakers in Congress are working on legislation to force the BCS to drop all references to a “national championship.” It’s an effort to get the group to include more conferences and eventually switch to a traditional playoff system.

Bill Hancock is the executive director for the BCS.

One thing is for sure. There will be, at least, two undefeated teams at the end of this bowl season. And they won’t face each other. That’s enough to keep the BCS in the news through the off-season.