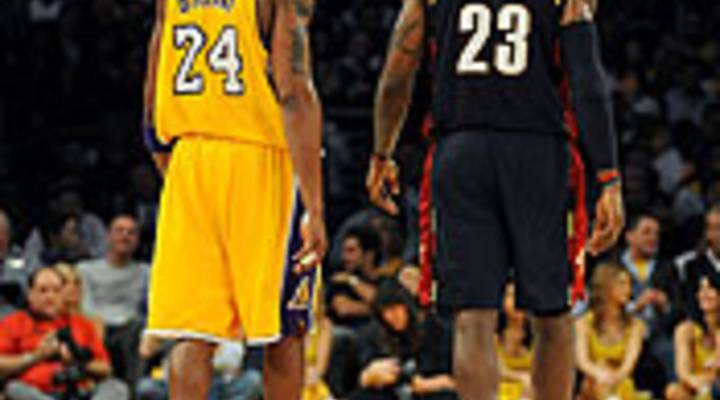 COPY
Kobe Bryant of the Los Angeles Lakers walks next to LeBron James of the Cleveland Cavaliers during a game break at Staples Center on January 19, 2009 in Los Angeles, Calif. Harry How/Getty Images

Kobe Bryant of the Los Angeles Lakers walks next to LeBron James of the Cleveland Cavaliers during a game break at Staples Center on January 19, 2009 in Los Angeles, Calif. Harry How/Getty Images
Listen Now

BILL RADKE: Today, the NBA champion L.A. Lakers play the Cleveland Cavaliers, which means a Kobe Bryant-Lebron James showdown. Last season,
companies designed whole ad campaigns around the idea these two would meet in the NBA finals. ell, that didn’t happen, but it hasn’t stopped one company from marketing the rivalry again.

NANCY FARGHALLI: Last season before the NBA finals, Nike rolled out a series of ads with Kobe and Lebron as puppets.

Paul Swangard teaches sports marketing at the University of Oregon.

Paul Swangard: There was an effort, I think, in the ad campaign to present the possibility of this dream match-up that I don’t think just Nike wanted to see.

The thing about dreams, sometimes they don’t come true. Lebron’s Cavaliers lost before they reached the finals. But another season, another shot at redemption — at least ad-wise. The puppets are back.

Swangard says Nike is fighting for market share in this down economy. Sales have declined and the company cut nearly 5 percent of its workforce this year. The marketing budget is also smaller. Swangard says that means building on ads that consumers already recognize.

Swangard: Nike is pretty good about refreshing things on a pretty regular basis. But the chance certainly in this year as well to have that dream match-up occur, gives us the thought that, Why not give it another try and see if we can extract some more value out of a campaign we’ve invested a lot of money in?

Plus, he says, this time Nike isn’t waiting for the playoffs to roll out the ads.