The skin(s) game with Tiger

The skin(s) game with Tiger

The Tiger Woods story is officially spiraling out of control. So, too, it seems is his marketing value, his public image and the media coverage of him. But certain people not named Tiger are raking in the dough.

“God bless Tiger,” she said to a group of analysts at the UBS Global Media and Communications Conference in New York today. Consumers who seemingly can’t get enough of his reported extramarital affairs have helped drive big traffic surges to Yahoo’s front page, as well as its news, sports and gossip sites…

Ms. Bartz said that interest in the Tiger Woods story has even exceeded that of Michael Jackson, who died in June.

Meanwhile, on Wall Street, folks are trying to make a buck or 20 on the Tiger story. They’ve turned it into a bet. I hear the over/under on the number of extra-martial affairs in up to 24, now that 11 women have come forward.

But there’s hide nor hair of TW on TV. And Tiger’s selling power is dropping like a golf ball from a tree. From Bloomberg:

The 33-year-old golfer’s ranking on a list of celebrity endorsers plunged to 24th from 6th, based on the Davie Brown Index, which marketers and advertising agencies use to gauge the ability of personalities to influence consumer behavior.

Although, Bloomberg points out, stock investors aren’t punishing the companies Tiger’s associated with. Yet. For a while it looked like those advertisers would ride out the storm and stick with Woods. I’m not sure that’ll be the case anymore, with stuff like this out there now.

Perhaps most disturbing of all, is the media coverage, especially overseas. Why do I have the feeling this is the future of TV news in this country?

If you can’t get enough, there’s more at Clusterstock. 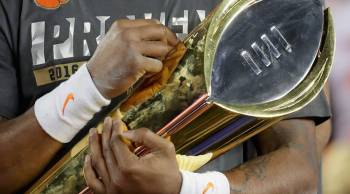