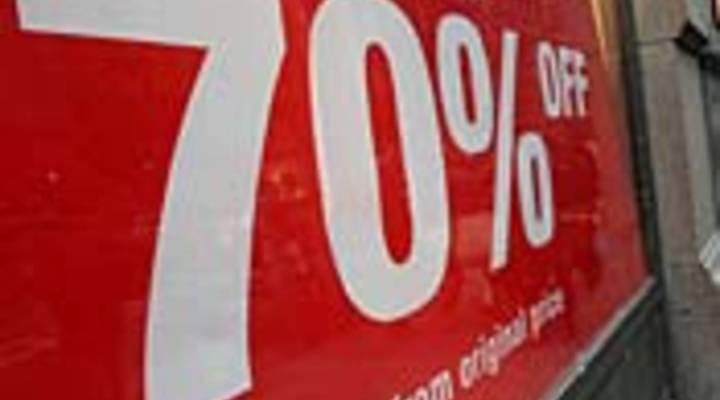 What a bad holiday means for retailers

COPY
An after-Christmas sale sign on Broadway in New York City. Deep discounts were being offered nationwide by retailers on the day after Christmas during a holiday season that has been slower than expected. Mario Tama/Getty Images

What a bad holiday means for retailers

An after-Christmas sale sign on Broadway in New York City. Deep discounts were being offered nationwide by retailers on the day after Christmas during a holiday season that has been slower than expected. Mario Tama/Getty Images
Listen Now

Bill Radke: There were some pretty dismal consumer-spending numbers coming out this week. We just are not spending like we used to. And since retailers make almost half their money this time of year, you got to wonder what would another dismal holiday mean? Here’s Marketplace’s Stacey Vanek Smith.

Stacey Vanek-Smith: It’s beginning to look a lot like another bad holiday season for retailers. Last year they were caught with too much inventory and had to slash prices. Sluggish sales this year are more bad news, says Conference Board economist Ken Goldstein.

KEN GOLDSTEIN: This four-week period between Thanksgiving and Christmas. This is it, this is the Super Bowl for retailing.

And some retailers are going to fumble. Holiday sales are expected to be 1-2 percent below what they were in 2008 and Goldstein says things are going get pretty Darwinian in the retail sector.

GOLDSTEIN: For those firms who are thinking about whether or not they want to remain independent or whether or not it’s time to merge with another chain, what happens or does not happen this holiday season is going to have a great deal to do with that decision.

These leaner times are likely to stick around, says Lynn Kahle, professor of marketing at the University of Oregon.

LYNN KAHLE: I think that a lot of people are saving more money. Americans probably are permanently going to be a little bit more cautious.