TESS VIGELAND: So here we are, on the verge of another national holiday. No, not Thanksgiving. Black Friday. You know, the day when shoppers unleash their combat skills and go bargain hunting. And there will be bargains. Huge ones. But it wont be like last year, when retailers were practically giving the stuff away.

As Sally Herships reports, retailers have had a whole year to get smart about the holiday season.

Salesperson: That’s a cashmere, it’s not thick, so it’s comfortable.

Sally Herships: I’m sitting on a couch at Charles Nolan, a boutique in New York City’s Greenwich Village. There’s a big-screen TV with one of those looping fires. Racks are filled with sparkly gold hoodies and cocktail dresses. Vintage Barbies decorate the shelves. The store feels as full as a Christmas stocking. But there’s a lot less here then last year.

Charles Nolan: Better to say no or say you’ll try and find it and reorder it for a customer than just have it sit in the warehouse.

Charles Nolan owns the store. He’s cut his inventory by 50 percent this year. And he’s been very strategic about what he did buy. Take the princess coat. It’s made of wool and comes in black or coral.

Nolan: Lots of women love the coral coat. But we also know this time, women don’t have a lot of disposable cash so they’re likely to go for a coat they can use more, i.e. the black one than the coral one.

So Nolan ordered more princess coats in black and he sold more, too. He also kept the order fairly small. Not only because he didn’t want to be stuck with coats he’d have to mark down. Because carrying less is about something else, too.

Priya Raghubir is an expert in consumer psychology at NYU.

Raghubir: When people are told they can’t get something or something is in limited supply, demand for that soars. The minute you limit the customer — woop! — they’ll buy a lot more.

Raghubir says after last year’s huge discounts, retailers are trying to re-program consumers for life without the 75-percent markdown. This season retailers aren’t willing to give away the store. At least not all of it, not even on Black Friday.

At Wal-Mart, the most deeply discounted in-store specials will be available on Friday for only six hours. And specialty stores like Brooks Brothers are limiting their biggest promotions to just a couple days.

Nancy Koehn is a retail historian at Harvard Business School. She says retailers are trying all sorts of approaches to get consumers to respond to something other than discounts.

Nancy Koehn: So we’re talking about empathy, cash sensitivity and some commercial imagination, not to mention aesthetics.

Andrew Jacobs knows what she means. He owns Jam Paper, a New York City stationery store. Jam used to sell a big roll of ribbon, 100 yards for $35. But last year, many customers didn’t want to lay out that much cash. So Jam created a medium-sized roll.

Andrew Jacobs: They outsold probably three to one, the large rolls.

Herships: So people were buying, they were spending.

Jacobs: More money per yard, but less money at the time.

And this year Jacobs came out with an even smaller roll.

Jacobs: It’s over twice as expensive as the medium-size roll, but it’s only $6.

Jacobs: Now, it is the least amount of money I need to spend right now.

Nancy Koehn says Jacobs has hit on a successful formula. Allowing consumers to spend less by repackaging materials in smaller quantities. She says lots of big retailers are using a similar strategy — like Clinique, the makeup company, which is offering smaller sizes of its cosmetics. This way, these retailers can continue to sell at full price. And customers can reacquaint themselves with paying it.

That’s not to say every retailer has found a way out of deep discounting from last year. I stopped by a sample sale in New York City’s Soho to talk with shopper Nancy Wong.

Nancy Wong: I don’t go to the stores anymore, I just wait for the sample sales. We’re in a recession — save money.

Some things never go out of style. 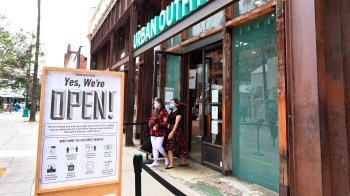