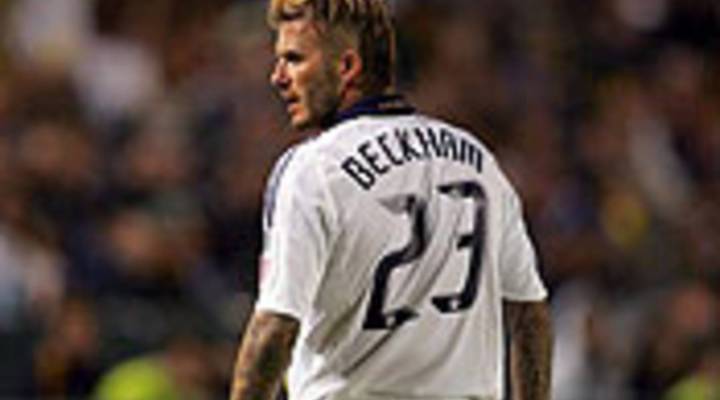 Beckham’s era in L.A. may pay off

COPY
David Beckham of the Los Angeles Galaxy plays in a match at The Home Depot Center in Carson, Calif. Victor Decolongon/Getty Images

Beckham’s era in L.A. may pay off

KAI RYSSDAL: If you know nothing else about soccer, you probably probably still have heard the name David Beckham. The British player was signed by the Los Angeles Galaxy three years ago for a staggering amount of money. Expectations were appropriately high, but Beckham really hasn’t done much to meet them. In fact, fans have been downright disappointed. That could change this weekend, though. Beckham and the Galaxy play Salt Lake for the Major League Soccer championship. And win or lose, Beckham at last seems to be earning his money.

Nancy Farghalli: Let’s just say the season didn’t start so well for David Beckham. Fans booed him at his first game back with the L.A. Galaxy in July.

Tom Payne is the President of the L.A. Galaxy.

Tom Payne: One thing I got from some people around the league is “Wow, your fans really got on David. They really do care.”

David Carter: I don’t know if the fans have necessarily embraced Beckham in Southern California or the around the league as much as they have accepted him. The injuries, the scheduling challenges and all the rest of it. I think they expected him to show up, and from the very beginning, elevate the franchise.

Here’s a news flash for the fans: Turns out, he did. In 2007, The L.A. Galaxy sold 600,000 jerseys worldwide when Beckham signed. Sports economists say the franchise is now worth $100 million. And the team, with Beckham, has been invited to play overseas.

Payne: There always been this debate about you know whether bringing David was the right thing or the wrong thing. Well, I’m the guy who has to run the business here and it’s absolutely the right thing.

Beckham is making nearly $7 million this year — the highest salary in the league. But Payne says Beckham’s made the team a global brand, and from a marketing perspective, that’s right on target.