Debit will be hot this holiday season

Debit will be hot this holiday season

Kai Ryssdal: We will be graced with the September numbers on retail sales tomorrow. There will be lots and lots of talk about what those figures might mean for the looming Christmas shopping season. We figured we’d avoid the rush and do the story today. Will it be another horrifying holiday? Or are consumers finally ready to spend again? And if they are, will they be pulling out the plastic? Marketplace’s Mitchell Hartman reports.

MITCHELL HARTMAN: I pulled out the plastic this morning for my daily latte.

That’s the question a lot of consumers will be asking themselves. A debit card effectively means paying in cash. A credit card means taking out a loan.

David Robertson publishes the Nilson Report on card purchases. He says increasingly consumers are steering away from credit, and opting for debit.

DAVID ROBERTSON: Closing down credit card accounts. Paying down balances and not using those cards. And paying in real time, if you will. Paying now.

Robertson says usually, credit-card purchases rise in the lead-up to the holidays. Not this year.

ROBERTSON: Even people who tend to pay their bill in full every month will splurge at the holiday season, and this year that’s simply not going to be the case. Fewer people are going to be borrowing money and paying it back over time.

That means retailers will be selling less, especially high-priced items like electronics and jewelry because consumers tend to charge them rather than dinging their checking account right away.

MICHAEL FISCHER: We are seeing consumers who are cautious, there’s no doubt about that.

That makes him cautious too. So he’s cutting back on the inventory he orders to stock his shelves for the holidays, which could hurt his suppliers.

Fischer’s gotten used to the idea this could be a slow holiday season. But he says Americans are saving more, and that’s good news.

FISCHER: And if you talk to the regional bankers where I live, none of them are short of money to lend. The money is being saved, and I think long term it is healthy for all of us.

A silver lining if not for his stores in the short term, then perhaps for his region and the country. 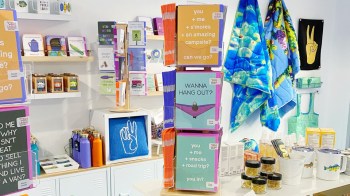