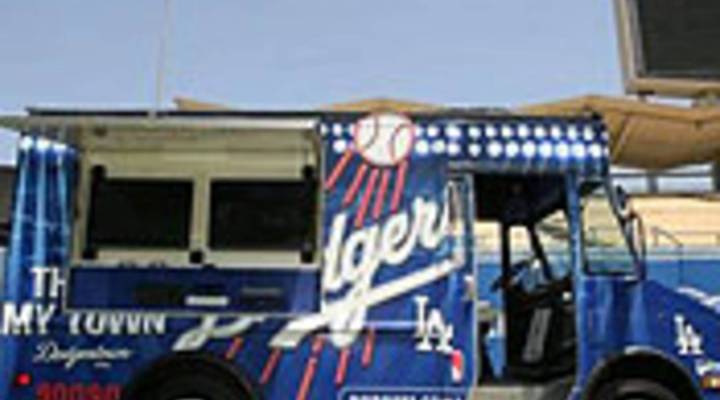 KAI RYSSDAL: There are some advantages to living in a place like Los Angeles, a city with a fully developed car culture. Parking is usually not too difficult to find. Once you figure out the freeway system, it’s pretty easy to get around.

And you can buy pretty much any food item you like from a truck: fancy sno-cones, Korean short-rib tacos, starting next month, grilled cheese sandwiches too. Customers go online to see where those trucks are going to be, and then they line up for a taste.

As it turns out, there’s a baseball team in town that’s trying to attract a similar following as Nancy Farghalli reports.

Renee Rodrigeuz: I follow updates on Twitter. They update the location where they are gonna be. And as soon as I found out that it was going to be here, I came here.

Renee and Chris stand on a street corner in the Sherman Oaks section of Los Angeles. It’s around noon.

Renee is on the lookout for the Dodger ticket truck, the first of its kind in major league baseball. Think of it as a box office on wheels. And Renee says the truck is an easier way to buy tickets. He doesn’t have to drive to the stadium — that can take an hour from his neighborhood — and there are no service charges.

Rodriguez: I’ve tried Ticketmaster but they charge convenience fees and delivery fees. So it adds up. So it’s a lot easier to buy them here.

The truck arrives about 20 minutes late. Which, in Los Angeles, means it’s pretty much on time. This truck is hard to miss. It’s Dodger blue. And it has two flat-screen televisions mounted on one side. Tuned to sports, of course.

From the television: Pull your face mask down, all right. How about the chest guard? It looks loose. Is it loose?

Renee is the first in line.

Ticket seller: What section were you looking for?

As he figures out what to buy, other people take notice of the ticket signs. Beatrice Lorela says she had no plans to go to the game today. But…

Beatrice Lorela: I was driving buy and saw the truck. And I normally get them on the Internet.

And that’s exactly what Dennis Mannion wants. He’s the chief operating officer of the Dodgers. He says the truck creates spur-of-the-moment sales. It offers deals — like two-for-one tickets — which you can’t find online.

Dennis Mannion: The truck is a way that you see it and you want to buy.

Overall, Major League Baseball expects a 5 percent decline in attendance this year. The Dodgers are averaging more than 45,000 a game, roughly 300 more than last year. Mannion credits the team’s numbers to a focus on generating last minute sales. And selling tickets away from the stadium helps.

Mannion: We are finding a lot of success within shorter windows, 10 days to a week outside of the games.

Later that evening, Renee Rodriguez is at the baseball game with his wife and two kids.

One of Rodrigue’z sons: Matt Kemp is hitting next?

Renee says these seats are the best he’s had all year.

Rodrigeuz: I’m sitting in the reserve section, section one. Right in the middle of the field and I have a good view of everything here. So it is a very good deal.

Four tickets for a total of $31. He got a two-for-one deal from the truck.

Something, he can cheer about. 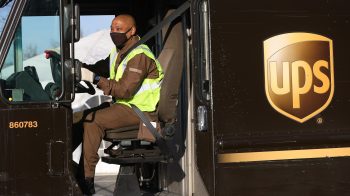