Kai Ryssdal: The back-to-school shopping season was kinda lousy for a lot of retailers. But now that college students have arrived back in class, there is hope again. Sales of all those desk lamps, toaster ovens and throw rugs for otherwise dreary dorm rooms are expected to top more than $600 million this year. And one retailer is even throwing a party to make sure it gets a slice. From WBUR in Boston, Monica Brady-Myerov reports.

MONICA BRADY-MYEROV: It’s Friday night outside a Target store near Boston. Employees wear T-shirts that say Smart Scholars Save Dollars as they hand out free soda to hundreds of freshmen from Boston College. Target paid for eight buses to shuttle the students between the store and campus. Freshmen Kevin Chapin says he already did most of his back-to-school shopping but came anyway.

KEVIN CHAPIN: More to meet people and get some stuff.

The store was closed to the public, and inside, a DJ set the tone for what felt more like a dorm party than a shopping trip. Target planned the event with Boston College, and it was included in the school’s official freshman activities.

ERIN CONLON: It’s fun to hang out with people you just met and get to know more people like on the bus. It seemed like everyone was going so it seemed like a good idea.

Freshmen are the prime targets because most don’t own cars and aren’t old enough to drink so they consider a Friday night at Target a good time. Kathleen Seiders, associate professor of Marketing at Boston College, calls it a good strategy.

KATHLEEN SEIDERS: This is exactly the demographic that Target wants. These are fairly affluent kids in many cases at a lot of these private schools.

Most retailers rely on coupons and ad inserts to attract college students. Seiders says Target’s after-hours parties could pay off over the long term.

SEIDERS: When their parents come to town they take their parents to the store because they know where it is. And it’s now their store, so when you think about all these factors it can really add up for the store.

Target takes an even longer view. Spokeswoman Leah Guimond says the retailer sees the parties as a way to cement brand loyalty.

LEAH GUIMOND: It’s way for us to build relationships with these students over the years as they evolve into different life stages of getting married and having babies and growing with us over the years.

Guimond won’t say how much Target makes off these back-to-school parties. The chain store has thrown similar events in other cities in years past. But this year it expanded the program to Los Angeles, Chicago, and Boston, the city with the most college students per capita. 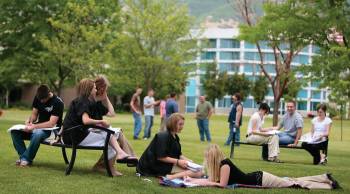