The lovely but financially irresponsible state in which I reside is holding a garage sale this Friday. Yes, the entire state.

It’s actually called The Great California Garage Sale.
See photos of everything that’s available. Some items are on Craigslist. There are a few on Ebay, including a 2002 Crown Victoria.

I know, can you believe it? But it’s only $3,051.01 right now and the car’s visor is signed by Schwarzenegger. 15 other Schwarzenegger-signed cars are available.

A bobblehead collection of the Sacramento Kings basketball team. Experts are saying it could solve California’s budget woes in one fell swoop:

Meanwhile, let’s congratulate the city of Malibu for being able to afford a city hall building. All these years, Malibu’s been renting its town hall because property is way too expensive (median home price — $2.8 million).

But last month, Malibu officials bought the local performing arts center, which had been owned by a church, and they’re turning part of it into a town hall. The rest will be rented out.

They bought it at a foreclosure auction. For $15 million. 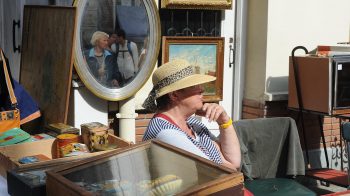