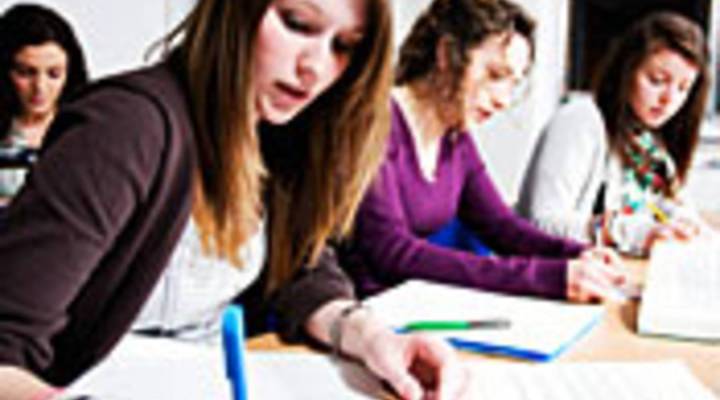 Stacey Vanek-Smith: Something tells me he’s got
a toga party or two in his future. Sending kids off to college is generally the time
for several big talks, including the money talk. You don’t want your kid coming back a financial disaster.

If you haven’t quite gotten around to that yet with your freshman never fear! We’ve got Janet Bodnar here. She’s with Kiplinger’s Personal Finance magazine
and author of “Raising Money Smart Kids.”

Janet, what’s the first thing a parent should consider?

Janet Bodnar: I think the best thing to do is to send your kid off to school with a checking account and a debit card attached to it. It gives them convenience, but at the same time, they’re not going to get into the same kind of trouble they might get into if they have a credit card, because there’s a limit.

Yes, it is true they can overdraw the checking account and they can get dinged with a $30 overdraft fee. But even that, you can protect against. You can have them set up with overdraft protection so that there’s money transferred into the account. If there is some sort of an emergency, you can transfer money into the account. So they have some protection, but they also have some responsibility for managing their own money. And that’s part of the college experience.

Any responsibility that you can transfer to them is really well worth doing, because they really learn life lessons while they’re off there on their own.

Vanek-Smith: Well speaking of overdrawing accounts, what are some of the pitfalls kids can fall into that parents should maybe help guard them against?

Bodnar: Well I think that one thing that happens is, kids don’t understand how many extra expenses they’re going to have. What I hear when I talk to college kids, what they tell me is that the biggest unexpected expense they have is food outside the meal plan.

Then there are other unexpected expenses, especially, for example, if a child goes off to school with a car and boy, I would really recommend against any freshman going off to college with a car. Because you just don’t know what the situation’s going to be. But not only are there fees, but then kids say, well I couldn’t find a parking spot, so I parked illegally, so they’re running up tickets and the tickets are going onto the school bill. And then the parents are saying, “Wait a minute, you’re running up all this, why?” “Well you know, I couldn’t find a place to park.”

Vanek-Smith: You sound as if you speak from experience.

Bodnar: Yes. Well, you just don’t think of these things until your kid does them and then you think, “Woo hoo.” And there are other unexpected expenses of fraternity and sorority dues and fees that are a biggie. Because you know, the kids are freshman, they get rushed, the pledge a particularly fraternity. And then you find out that, gee, not only do you have to pay to live there, but the fees are $1,000 or more just to join. And who’s going to pay that? Again, you thought, you, the parent thought that you were home free, when you finished the tuition bills. Now you’re getting bills for $1,000 or more. Do you really want to do this?

Vanek-Smith: So of course, we cannot talk about kids going off to college and financial independence for the first time without talking about credit cards. Because we’ve got a lot of listeners write in saying that they set their child up with a credit card to go off to college for emergencies and that they were sort of able to control what the terms of the credit card were, what kind of credit card they got. It sounds like this is not what you would recommend. Why is that?

Bodnar: My personal feelings are first of all, this is another funny thing that parents may not be aware of, you give your kid a credit card and say, “This is for emergencies.” But what qualifies as an emergency for a kid?

Vanek-Smith: Running out of pizza?

Bodnar: Exactly. Running out of pizza, new dress for the sorority dance. So I think that the thing is, first of all, you just need to be aware of that, that this kind of thing is going to happen. If you’re OK with that, that’s fine. But again, if they’re going to be running up bills that someone is going to have to pay later, probably you, then you may not want to go this route and I still think that the debit card route gives them the protection that you’re looking for and allows you to transfer money to them if they need it in an emergency.

Vanek-Smith: Janet Bodnar is the editor of Kiplinger’s Personal Finance magazine. She’s written extensively about kids and money and she’s the author of “Raising Money Smart Kids.” Janet, thanks so much for coming in.

Bodnar: It’s been my pleasure, Stacey.